In a Midget Division nailbiter this evening at Dominico Field at Christie Pits, the Homesteads edged the Monarchs 9-8 in 4 ½ innings. 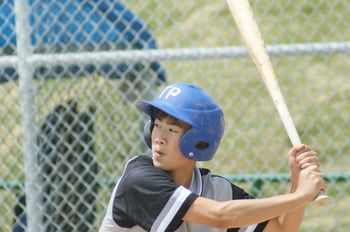 David (13) of the Homesteads scored two runs against the Monarchs.

The Homesteads clipped the reigning Midget Division champions through a formula of solid pitching, good defense, and making the most of their offensive opportunities.

Once again, the Homesteads received some stellar pitching from Oliver (11) and Markus (6), who combined to toss a pair of scoreless innings against the potent Monarchs batting order.

Leading by one run in the top of the fifth, the Homesteads sent out Vidit to close out the game. Vidit cooly extinguished the Monarchs rally attempt in 1-2-3 fashion to earn the save and preserve the victory.

In a postgame interview, Monarchs Head Coach Darryl Spencer was still very pleased with his team’s overall effort against the Homesteads.

“All around, it was a good effort. Tristan has gained about 20 mph on his fastball since last season. But struggled to find consistency in the strike zone. Josh was lights out off the mound.”