IN AN ORTHNITHOLOGICAL PEEWEE SHOWDOWN, THE JAYS TAKE FLIGHT IN FINAL INNING TO EARN A DRAW

Game report composed with a file from David Lam

In a thrilling finish at the Peewee Division nightcap game tonight, the Jays took flight in the final inning and rallied for four runs to tie the Orioles 8-8 at Christie Pits Diamond 2. 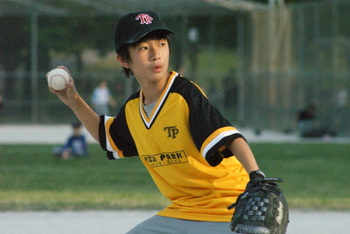 Orioles pitcher Victor (2) pitched a solid game against the Jays.

The Orioles had used a disciplined presence at the plate all evening long to build a lead against the Jays. The O’s offense was ignited by big hits delivered by Connor (12), Jamie (13) and Noah (15).

Meanwhile, Orioles pitchers Victor (2) and Ben (4) combined to stifle the potent Jays batting order for most of the game.

Trailing 8-4, the Jays refused to wave the white flag of surrender and gamely rallied for four runs to tie the game. The Jays made the most of their opportunities in the comeback as they took advantage of some defensive errors by the Orioles.

With two outs and the bases loaded, Orioles pitcher Simon dug into his reserve tank and struck out next Jays batter to extinguish the Jays offensive surge and preserve the tie.