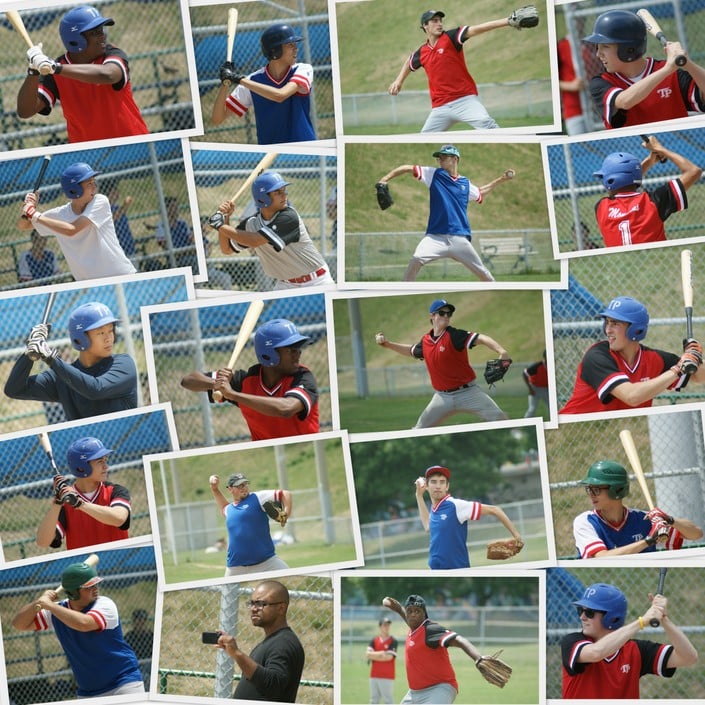 Beneath warm summer skies at Dominico Field this afternoon, the Monarchs prevailed 9-5 in four innings of Midget Division action. 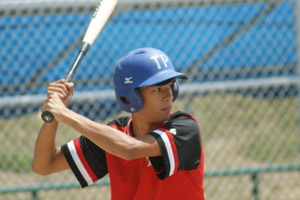 Ashford’s (1) clutch 2 RBI double in the fourth inning propelled the Monarchs to their win over the Lizzies.

With the game tied 5-5, one out, and two runners on base in the top of the fourth, Ashford (1) of the Monarchs delivered a clutch 2 RBI double that broke the deadlock and propelled the defending Midget Division champions to victory.

The game between two well balanced squads was a close and exciting seesaw affair for three innings. In the end, the Monarchs made the most of their opportunities to emerge victorious.

In the top of the first, Lizzies southpaw starter Jeff (12) threw a stellar inning in keeping the explosive Monarchs offense off the scoresheet with a strikeout and a pair of solid defensive plays from his teammates.

The Lizzies charged out the gates in the bottom of the first with three runs to take the lead. Dante (15) and Jeff (3) led off the inning with respective singles. David (10) followed with a clutch 2 RBI double to bring Dante and Jeff home with the opening runs of the game. After a wild pitch, Daniel came home on a Monarchs throwing error.

Trailing 3-0, the Monarchs stormed back with a vengeance and scored four runs in the top of the second to take lead. Tristan (10) drew a walk to lead off the inning, and promptly stole two bases to advance to third. Leniel (3) followed with a RBI single to bring Tristan home. Alex (14) delivered a RBI triple that brought Leniel home. A subsequent Lizzies wild pitch allowed Alex to blaze home with the tying run. Philip (9) earned a walk and immediately reached third on a pair of wild pitches by the Lizzies. A throwing error by the Lizzies allowed Philip to jet home with the go ahead run. 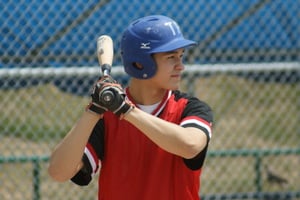 Alex (14) of the Monarchs went 2 for 2 (triple, single) at the plate with a RBI and two runs scored.

The Lizzies doggedly answered back with a run in the bottom of the second to tie the game. With two outs, Daniel drew a walk, and advanced to third on a wild pitch and passed ball. On a wild pitch by the Monarchs, Daniel motored home with the tying run.

However, Monarchs reliever Tristan (10) put in a powerful effort on the mound and was able to limit the potent Lizzies offense to one run on a strikeout and an all star 9-6 double play from his teammates.

In the top of the third, the Monarchs scored one to regain the lead. With one out, Josh (12) hit a double, and subsequently advanced to third. On a Lizzies error, Josh came zooming home with the go ahead run. However, Lizzies reliever David (10) pitched a solid inning where he allowed only one run while striking out two Monarchs.

Trailing 5-4, the Lizzies answered the bell in the bottom of the third with a run that tied the proceedings. The Lizzies loaded the bases on two walks and a hit batsman to lead off the inning. With no outs, Dante hit into a fielder’s choice, which allowed Sam to come home from third with the tying run. But, Monarchs reliever Julian (13) put in a strong showing in allowing only one Lizzies run while strikinh out one.

The Monarchs made the most of their opportunities in the top of the fourth as they scored four to surge ahead 9-5. With one out, Alex and Philip got on base respectively with a single and a walk. Ashford (1) followed with a clutch double that brought Alex and Philip home. After Ashford had stolen third, he came blazing home on Lizzies wild pitch to the backstop.

Leading 8-5, the Monarchs followed with two walks to load the base. Leniel hit into a fielder’s choice, which allowed Josh to come home with the final run of the inning.

Lizzies pitcher Josh closed it out in 1-2-3 fashion in the bottom of the fourth to seal the deal and pick up the win.