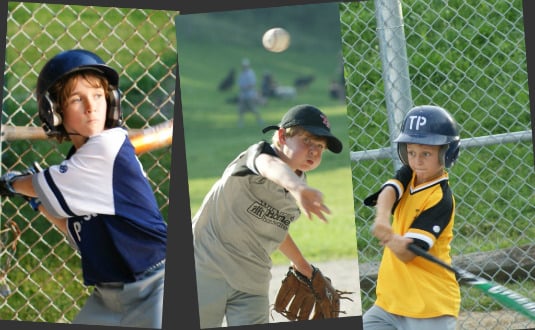 Barnburner is the best word to use to describe the action and excitement in all three Mosquito Division games played today underneath warm and sunny skies at Christie Pits and Bickford Park.

In a rock ’em and sock ’em battle royale on Diamond # 2, the Cardinals rallied from a three run deficit to edge the Lizzies 11-10 in four innings of play.

The Dodgers staged an incredible rally in the bottom of the third and final inning to overtake the Cubs 9-8 at Diamond # 3. Down 8-4, the Dodgers chipped away at the four run deficit to score five runs for the victory. Our TP Cub Reporter twittered that the comeback was sparked by an amazin’ two-run home run by Michael S. (6) of the Dodgers.

In a thrilling barnburner at Bickford South, the Pirates swashbuckled their way to a 10-7 win over the Giants in four innings of play.