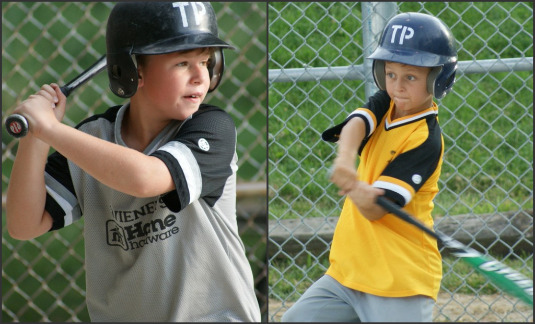 Five Alive! From left to right: Bennett (5) of the Giants and Simon (5) of the Pirates.

The Giants staged a miraculous seven run comeback on the high seas of Diamond # 3 to steal the treasure of victory away from the Pirates 11-10 in four innings of play today.

The Giants were down 10-4 heading into the bottom of the fourth inning. However, the Giants plundered and pillaged the Pirates with their offensive swords and guile and eventually rallied to usurp the gold doubloons of victory away from the Buccaneers.

Our TP Cub Reporter twittered that a special kudos should go to Simon Ball (5) of the Pirates who made a spectacular defensive play at shortstop off a line drive in the bottom of the fourth inning for an out.