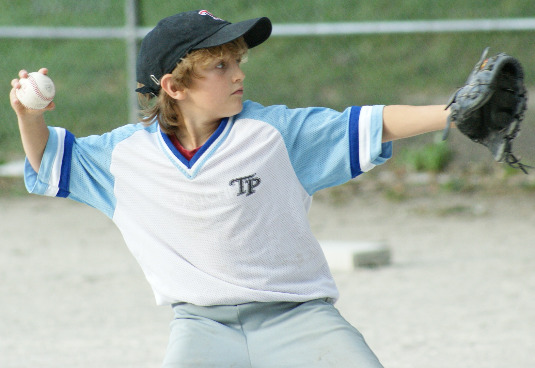 Pierce (13) of the Dodgers pitched a scoreless third inning versus the Pirates.

With the TP Tournament starting in only five days, rain put a damper on the final day of regular season play in the Mosquito Division.

A rainstorm that lasted ten minutes at Christie Pits forced the cancellation of two Mosquito Division games. The downpour had deposited deep pools of water on both Diamonds # 2 and 3 and had rendered the diamonds unsafe to play on.

Despite a ten minute rainstorm at Bickford South, the Dodgers and Pirates were able to resume play after the downpour. In the end, the Dodgers defeated the Pirates 9-6 in three and a half innings of play.

The game was a seesaw affair after two innings. With the score tied 5-5, Pierce (13) of the Dodgers took charge and pitched a scoreless third inning against the Bucs. His pitching effort inspired his Dodgers teammates to score four runs in the bottom of the third to take a 9-5 lead. It was a lead they would not relinquish as Jayden (8) of the Dodgers closed the door on any comeback by striking out three Pirates to seal the victory.