O’s HANG ON FOR VICTORY OVER TENACIOUS BEANTOWNERS 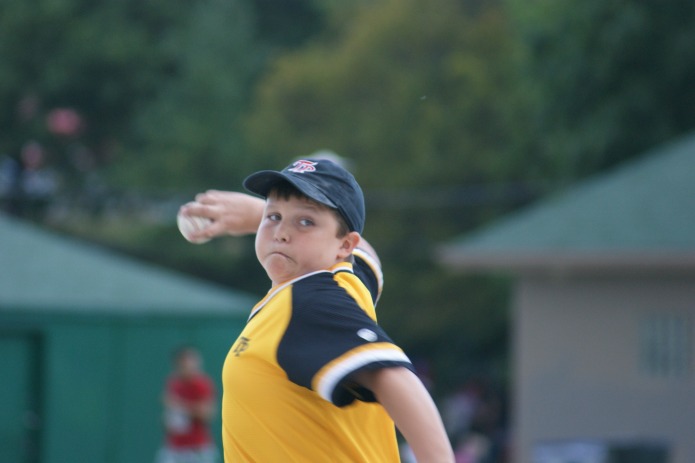 Connor (12) of the Orioles pitched two strong innings in allowing only three runs and striking out five Red Sox for the victory.

In a thriller of a Peewee Division game on Diamond # 2, the Orioles hung on for an exciting 9-8 victory over the Red Sox in four innings of play.

In a seesaw battle royale, it was only fitting that the game ended on a dramatic play.

With two out and the Orioles clinging to a precarious one run lead, Arlo (3) of the Red Sox made a daring attempt to steal home in the bottom of the fourth to tie the game. However, Orioles pitcher Connor (12) threw a strike to catcher Sam (12) who applied the tag on Arlo as he slid into home. Before the dust had settled around the dish, the umpire called the baserunner out and the game was over.

The Red Sox managed to build a 5-1 lead through two innings using an elixir of strong pitching and opportune offense. 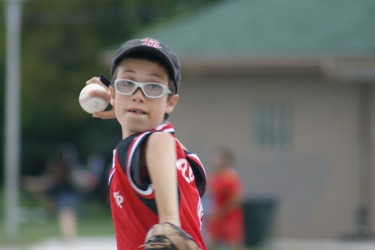 Cooper (8) of the Red Sox pitched two stellar innings in allowing only one run and striking out five Orioles.

Pitcher Cooper (8) of the Red Sox was stellar in the first two innings as he neutralized the potent Orioles batting order by limiting them to only one run and striking out five.

However, the never say die Orioles staged a dramatic four run rally in the top of the third to tie the game 5-5.

In the bottom of the third, Connor of the Orioles was masterful as he allowed no runs and struck out three Red Sox batters to keep the game tied.

With one out in the top of the fourth, the Orioles cobbled together four walks and two singles to score four runs to take a 9-5 lead. The fourth run (and eventual winning run) came in when Sam of the O’s successfully stole home from third.

However, the Red Sox refused to wave the white flag of surrender as they stormed back with three runs in the bottom of the fourth to trail 9-8.

With nobody out and clinging to a one run lead, Connor of the O’s dug deep into his energy reserves and gamely struck out the next two Red Sox batters. With two out, Arlo of the Red Sox drew a walk and eventually advanced to third to set up the dramatic finish.