IN AN EXCITING AND WELL PLAYED GAME BY BOTH TEAMS, THE CARDS SOARED TO VICTORY 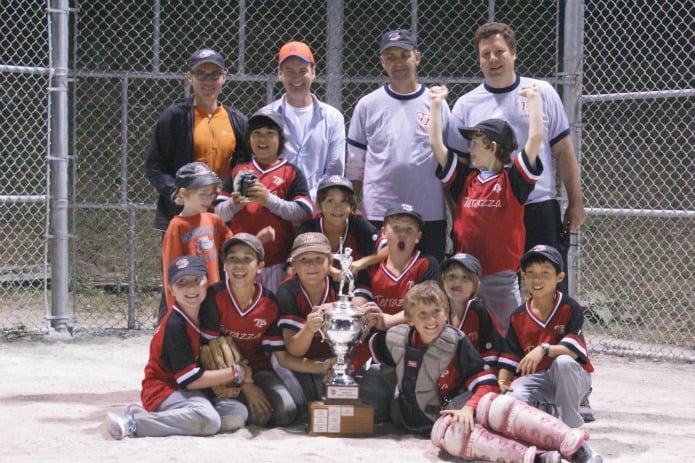 In an exciting Mosquito Division Final by both teams this evening at Diamond # 2, the Cardinals took flight and defeated the Cubs 9-6 in five innings to win the Toronto Playgrounds Mosquito Championship.

The game was a thrilling battle between two balanced squads as the lead changed hands several times in the early innings. 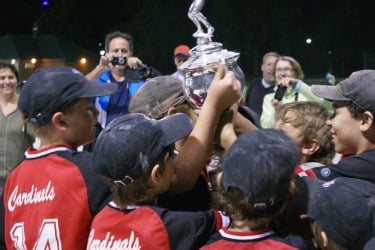 With the Cubs (1) ahead 2-0 after the first inning, the Cardinals (3) used a disciplined approach at the plate in the top of the second to draw six walks (plus a single) and take a 4-2 lead.

Trailing 6-2 after 2 ½ innings, the Cubs tenaciously clawed back with three runs in their half of the third to cut the deficit to one.

With two outs and the tying run at first base, Sasha (6) of the Cubs hit a triple to left field. However, the potential tying run was gunned down at the plate on a spectacular 7-1-2 defensive play by the Cardinals.

Another defensive gem in the bottom of the third was a super catch made by Cardinals pitcher Maxwell (4) who caught a scorching liner hit by John (10) of the Cubs to rob him of a sure hit and record the second out in the inning.

The Cardinals punched across two more runs in the top of the fourth to increase their lead to 8-5.

In the bottom of the fifth, Bennett (14) of the Cardinals mowed down the Cubs 1-2-3 on three strikeouts.

Trailing 9-5, the Cubs gamely scored one to trail by three. However, Bennett struck out another three Cubs and closed out the game and the championship victory.

The Cardinals were blessed with stellar pitching and a stingy defense as they stymied the Cubs for most of the game. Their ability to keep the Cubs off the basepaths for the majority of the proceedings was a huge factor in their victory.

Another key factor in the win was the Cardinals ability to make the most of the offensive opportunities presented to them by a usually stingy Cubs bullpen.