TRAILING 9-4, TORONTO PLAYGROUNDS STAGES A TENACIOUS FIVE RUN RALLY AND HOLD WESTON SCORELESS IN THE BOTTOM OF THE FOURTH TO PRESERVE THE TIE IN THEIR SEASON OPENER 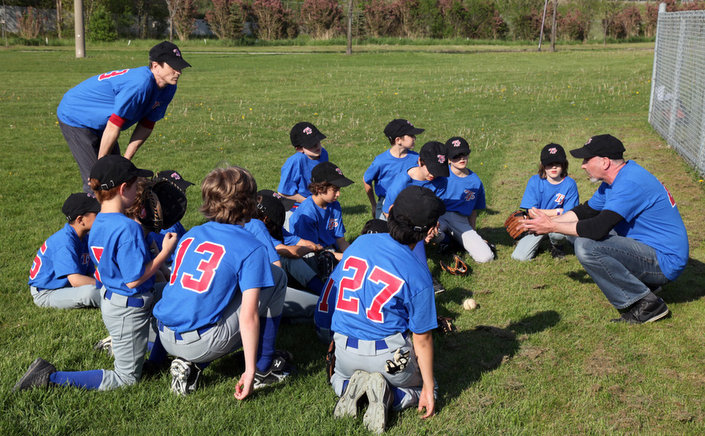 Mosquito Select Head Coach Mike Pett (right) holds a pregame meeting with his players before their season opener against Weston at Pelmo Park.

Brian (25) pitched a scoreless fourth inning against Weston to preserve the tie for TP.

In a four inning thriller at Pelmo Park this evening, the Toronto Playgounds Mosquito Selects rallied for five unanswered runs in the top of the fourth inning and held Weston scoreless in the bottom half to preserve a 9-9 draw in their season opener in the EBA Select Loop.

Although they trailed 9-4 after three innings of play, the Mosquito Selects refused to raise the white flag of surrender against a tough opponent on the road. Keying the dramatic rally in the fourth was a clutch two RBI double by Jeremy (11) of the Mosquito Selects. TP also used a combination of speed and opportunism to take advantage of some Weston defensive miscues to score the necessary runs to tie the game.

In the bottom of the fourth, Brian (25) of the Mosquito Selects cooly pitched a scoreless inning to preserve the tie. In a postgame media scrum, Mosquito Select Head Coach Mike Pett (44) named Brian the player of the game for his steely ability to close out the game against Weston.

After Jack (27) and Adam (18) delivered RBI singles in the top of the first inning to give TP an early 2-0 lead, Weston’s offence scored five runs in the bottom half to jump out to a 5-2 lead.