On a pleasant evening at the Ted Reeve Athletic Field this evening, the Toronto Playgrounds Peewee Select team defeated North Toronto 9-2 in 5 ½ innings to win its first game at the East Toronto Friendship Peewee Select Tournament. 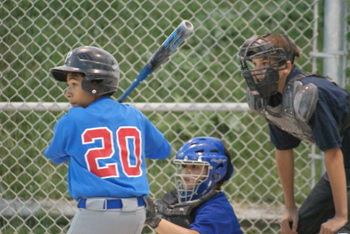 Justin (20) of the TP Peewee Selects.

Toronto Playgrounds victory was an all around team effort with contributions from every player on the roster.

Setting the tenor of the proceedings, TP starting pitcher Simon (5) pitched a solid 3 2/3 innings against the potent North Toronto lineup as he limited them to one earned run.

TP reliever Jaime (2) pitched a workmanlike 1 1/3 innings to close out the game. Jaime held North Toronto to only one run.

Meanwhile, the Peewee Select offense exercised dicipline and patience at the plate in scoring nine runs. Key moments in the the attack was a 3 for 3 performance at the dish by Simon (5), where he hit a triple while also scoring three times. David (13) went 2 for 3 at the plate with 3 runs batted in. Both Victor (23) and Reid (17) had two runs battred in,

The Peewee Selects continue their tournament sojourn on Saturday with games at 9 a.m. and 2:30 p.m. against East Toronto Blue and East York.