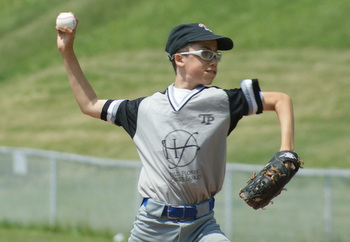 White Sox pitcher Cooper (3) had a solid effort against the Lizzies.

Under humid skies this evening, the White Sox topped the Lizzies 11-9 in a lively 4 ½ inning Bantam Division game at Dominico Field at Christie Pits.

The White Sox made the most of their opportunities in scoring eleven runs. Keying the White Sox charge was Bruno (9), who delivered a couple of clutch hits.

Meanwhile, the White Sox received some solid pitching from Cooper (3) and Salim (15).

The Lizzies gamely rallied in the final inning to close the gap. However, Salim of the White Sox eventually extinguished the Lizzies comeback hopes and picked up the save.

The Lizzies received strong pitching efforts from Alex and Giorgio. The Lizzies offense was sparked by Claire and Jack, who both scored two runs each.