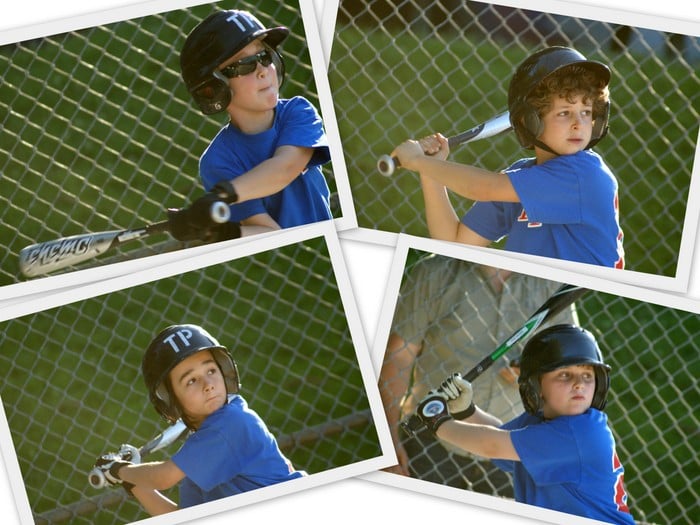 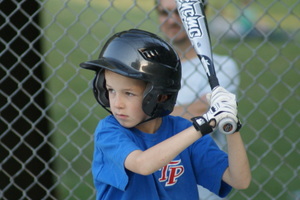 Dexter (4) delivered his first hit of the season in the bottom of the sixth inning.

Except for a few lapses, the Rookie Ball Selects played their best defensive game of the season as they held their opponent to less than ten runs for the first time this season.

Despite the final result, TP Rookie Ball Select Head Coach Bill Evans liked what he saw from his team.

“I continue to be impressed with the team’s enthusiasm and noticeable improvement on defense. Aside from a couple of misplays, we kept the score close and even had a three up and three down fifth inning, with all the putouts from Aaron (23).”

In the end, the difference in the game was Bloordale’s ability to take advantage of more of their offensive opportunities than TP. The Rookie Ball Selects offense was on the cusp of breaking the game open in the third, fourth and fifth innings with runners in scoring position. However, solid defensive plays by Bloordale extinguished those TP scoring opportunities that would have bridged the gap on the scoresheet.

Aaron (23) made several solid defensive plays at first base for the Rookie Ball Selects.

The Rookie Ball Selects got on the scoreboard in the bottom of the third as they scored a run trail 4-1. A sacrifice hit from Isaac (8) allowed Harris (18) to come home.

Bloordale scored two runs in the top of the fourth to widen their lead to 6-1. Once again, some solid TP defensive work minimized any further damage.

TP trimmed the deficit to four in the bottom half of the fourth when they scored one. A single from Aaron (23) allowed Louis (10) to come homeward bound.

After a scoreless fifth inning by both squads, Bloordale scored three insurance runs on four singles and a sacrifice to increase their lead to 9-2 in the top of the sixth.

The Rookie Ball Selects refused to wave the white flag of surrender in the bottom of the sixth as they battled to the very last out. Leading off the inning, Dexter (4) collected his first hit of the season. Dexter advanced to second on an error when Bloordale’s attempt to throw him out at first sailed high and the ball bounced into the gallery.

However, some solid defensive plays by Bloordale eventually snuffed out a determined TP comeback attempt.

In a postgame media scrum, TP Coach Evans was positive about the Rookie Ball Selects maturing process over the course of the 2012 season.

“The boys continue to make smart defensive plays and are showing some great team work as a unit. Some timely hitting by Piper (15), Lachlan (13),  Harris (18),  Jacob (5), Louis (10), Isaac (8) and Dexter (4) helped us plate a few runs. It’s back at the diamond on Friday for some Canada Day weekend batting practice!”

The Rookie Ball Selects (0-6) play their next game on Tuesday, July 3 when they host Royal York at Christie Pits Diamond 3.

EXTRA INNINGS: Kudos to both Lachlan (13) and Piper (15) for a 2 for 2 effort at the dish. An additional kudos to Dexter (4) for his first hit of the season.