IN A SEESAW BATTLE, TORONTO PLAYGROUNDS PULLS AWAY IN THE THIRD INNING FOR SEVENTH VICTORY 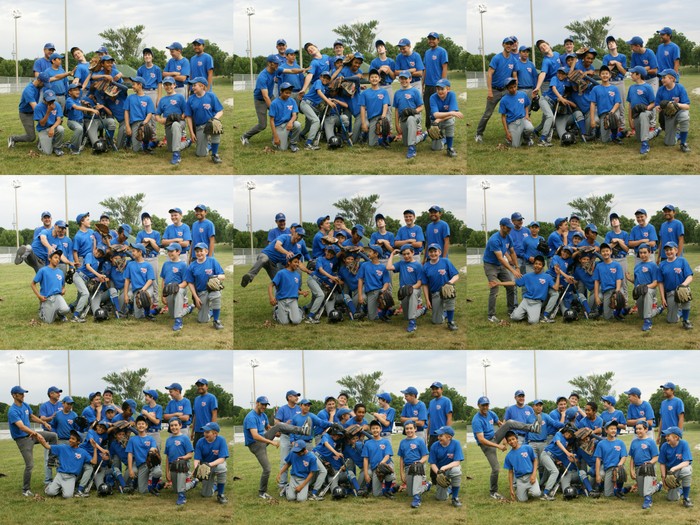 Please click the following link to access a larger version of the Collage of Picture outtakes from the 2012 Peewee Select Team Photo Session. 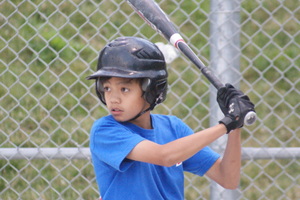 John’s (33) clutch two run triple in the bottom of the third against Royal York brought in the eventual winning runs of the game for the Peewee Selects.

The game was a seesaw tectonic battle between two seasoned teams, as the lead changed hands four times during the course of the first three innings. Ultimately, Toronto Playgrounds prevailed because of its stellar pitching staff, solid defense, and ability to make the most of their offensive opportunities.

TP starting pitcher Simon (5) set the tone early in the game as he limited the Cardinals to one run in the top of the first while striking out two.

The Peewee Selects doggedly answered back with two runs in the bottom of the first to jump out to a 2-1 lead. Keegan (44) led off with a double, and was followed on base by Simon (5), who was hit by a pitch. A one out single by Marcus (42) brought Keegan home with the tying run. Sam (34) followed with a 1-3 sacrifice hit that allowed Simon to come in with the lead run.

Royal York replied in the top of the second with a run to tie the game 2-2. TP reliever David (13) had a solid inning on the mound. The Peewee Selects closed out the inning with a stellar defensive play, when third baseman Luke (1) had the wherewithal and dexterity to snare a SIZZLING line drive to record the third out. 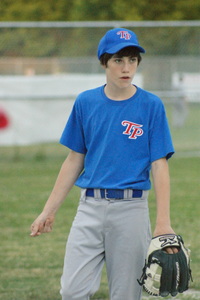 TP third baseman Luke (1) made a fantastic grab of a SIZZLING liner to record the third out in the second inning.

Toronto Playgrounds regained the lead in the bottom of the second. Luke led off the inning with a triple. Eventually, David (13) hit a 6-3 sacrifice that brought Luke home, resulting in a 3-2 lead.

However, the pesky Cardinals battled back with two runs in the top of the third, to retake the lead 4-3. Peewee Select reliever Keegan pitched solidly as he struck out two. The TP defense displayed another gem in the inning when left fielder Luke made a super catch to record the first out.

The Peewee Selects offense put the pedal to the metal in the bottom of the third as TP sent eight batters to the plate and scored five to surge ahead 8-4. With the bases loaded and no outs, Keegan delivered a single that brought Jamie (2) in with the tying run. Simon hit into a fielder’s choice that allowed Davey (15) to come in with the go ahead run. It was at this juncture in the procedings when John (33) hit a clutch two run triple that brought in Eamon (31) and Keegan. Marcus followed with a single that brought John homeward bound.

TP reliever Reid (17) had a rough start in the top of the fourth as he loaded the bases on three consecutive walks. With no outs, Reid eventually regained his composure and icily struck out the next two Royal York batters. Then, the Cardinals scored a run on a bases loaded walk to cut the deficit to three. However, Reid reached deep into his inner reserves and cooly mowed down the next Royal York batter to extricate himself and the team from a mojo jojo pickle.

In the bottom of the fourth, the Peewee Selects added two insurance runs to widen their lead to 10-5. After Justin (20) drew a one out walk, David slugged a triple that brought in Justin. Evan (24) hit a sacrifice to bring David home.

The Cardinals trimmed the deficit to four on a one out solo home run in the top of the fifth. However, TP closer John cooly induced a groundout and a strikeout to record the first two outs. TP Catcher Marcus made a great defensive play at the dish for the final out as he tagged out a wayfaring Royal York baserunner attempting to steal home on a dropped third strike.

In a postgame media scrum, TP Peewee Select Head Coach Rob Ball was ecstatic about his team’s seventh victory of the season.

“It was another great team effort. We pitched five different pitchers to Royal York’s two, and every batter reached base, or had a rbi, or sacrifice. These boys make me proud week in, week out!”

The Peewee Selects (7-1) play their next game on Wednesday, July 4 when they visit Millwood 1 to play Bloordale at 7 p.m.