IN AN EXCITINGLY CLOSE GAME, WHERE RUNS WERE AT A PREMIUM, THE LIZZIES EMERGED VICTORIOUS 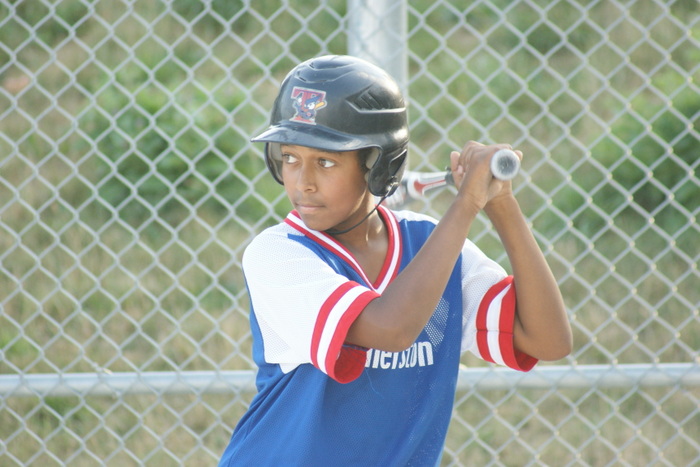 POWER STROKE > Marcus (9) hit a three run home run to the DEEP DISH PIZZA portion of centre field in the third inning to power the Lizzies to a 4-2 victory over the Jays.

In an exciting Peewee Division game where pitching and defense dominated the proceedings, the Lizzies prevailed over the Jays 4-2 in five innings this evening at Christie Pits Diamond 2. 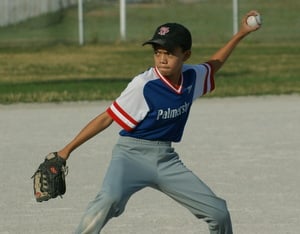 Lizzies pitcher John (3) started and closed the game for his team. John threw 1 2/3 scoreless innings while striking out one.

The game was a highly entertaining titanic battle between two evenly matched teams, where runs were at a premium, and players from both squads fought tooth and nail from start ot finish to gain the upper hand.

This was reflected on the scoreboard as the game remained scoreless for two innings.

In the top of the first, Jays starter Ben (4) cooly kept the Lizzies offense in neutral by striking out the first two batters that he faced. John (3) of the Lizzies followed with a triple that put him into scoring position. Marcus (9) stroked a fly ball to left centre field that seemed destined to fall in for a sure hit…..until, centrefielder David (8) appeared out of nowhere to make a brilliant defensive play by snaring the ball in his glove before it hit the grass to record the third out.

Lizzies starter John (3) answered the clarion call in the bottom of the first by enticing the first two Jays to ground out. But Keegan (2) of the Jays stroked a single, and advanced to third on a follow up single by Lucas (7). Subsequently, with two Jays in scoring position, John uncorked a wild pitch which sent Keegan blazing home. However, Lizzies catcher Hewitt (2) cooly retrieved the ball and calmly tagged a sliding Keegan at the plate for the out. 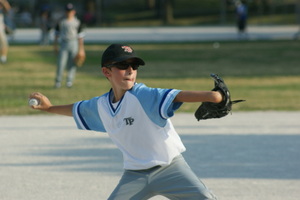 Jays pitcher Ben continued his mastery in the top of the second as he kept the potent Lizzies offense off the scoreboard by striking out two. With one out and Lizzies runners at second and first, Ben helped his own cause by calmly fielding a ball hit off the bat of Baxter (5) and adroitly making a throw to third to erase the lead Lizzies baserunner heading to third to complete a 1-5 fielder’s choice.

The Jays offense made some lido shuffle moves to break the scoreless logjam in the bottom of the second. After Felix (14) was hit by a pitch to lead off the inning, he immediately stole second. Then, Felix got the green light to steal third…..however, Lizzies catcher David threw a laser strike to his third baseman who quickly applied the tag to record the first out.

After walking Jacob (11) of the Jays, Lizzies reliever Marcus (9) helped his own cause by stealthily picking off Jacob at first base for the second out. Subsequently, with two outs and a runner at third, Marcus icily struck out the Jays batter to keep the game scoreless.

David (8) of the Lizzies stroked a triple in the fourth inning. David scored a crucial insurance run for his team when he came home on an errant Jays pickoff attempt.

With nary a run to be found on the baked playing surface of Diamond 2, the Lizzies broke open the flood gates in the top of the third by scoring three runs in dramatic fashion to surge ahead 3-0. Harry (6) led off the inning with a double. With one out, John drew a walk. With runners at third and first. Marcus followed with a powerful DEEP DISH PIZZA three run home run blast to centre field.

In the bottom of the third, Lizzies reliever Harry (6) kept the Jays off the scoresheet with a strong one strikeout effort. Harry was helped out by a great 9-3 put out by his right fielder for the third out of the inning.

The Lizzies added an insurance run in the top of the fourth to widen their margin to 4-0. With one out, David hit a powerful triple to the gap in left centre. David eventually scored on a failed Jays pickoff attempt. However, Jays reliever Keegan (2) held the potent Lizzies offense to a run and struck out two to keep his team within striking distance.

Picking up the torch from his teammates in the bullpen, Lizzies reliever David (8) mowed down two to keep the Jays off the scoreboard in the bottom of the fourth.

In the top of the fifth, Jays reliever Sam (15) neutralized the Lizzies offensive machine with a scoreless inning on two strikeouts.

With their backs to the wall, the Jays refused to concede defeat and gamely staged a rally in the bottom of the fifth with two runs to trim the deficit to two. Ben (4) walked, Sam (15) was hit by a pitch, and Keegan drew a walk to lead off the inning. With the bases loaded, Lucas drew a walk to bring Ben home. A subsequent passed ball allowed Sam to come home.

However, the Jays comeback attempt was eventually extinguished when Lizzies reliever John was inserted into the game by Head Coach Ted Sharp. John quelled the uprising and sealed the deal.

EXTRA INNINGS: Kudos to Marcus (9) for hitting a clutch three run homer to power the Lizzies to their victory. Marcus also pitched a scoreless second inning (1 K); Kudos to Lizzies pitcher John (3) for closing the game that he started. John threw a solid 1 2/3 innings, where he allowed no runs while striking out one. John also hit a triple in the first; Kudos to Jays starter Ben (4) for pitching two scoreless innings while striking out four; Kudos to Jays reliever Sam (15) for pitching a scoreless fifth inning where he fanned two Lizzies; Kudos to Lizzies reliever David (8) for pitching a scoreless fourth where he struck out two. David also scored one run and hit a triple in the fourth.