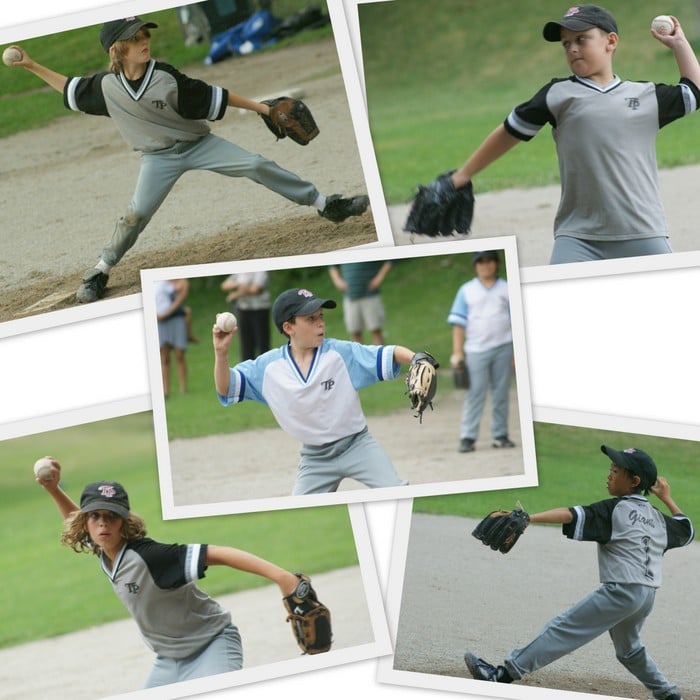 Beneath cloudy skies at rain soaked Bickford Park this evening, the Giants trumped the Dodgers 9-2 in five innings of Mosquito Division action.

The game was an excitingly close affair for 2 ½ innings as these two longtime division rivals battled tooth and nail for supremacy on the diamond. Strong pitching from both the Dodgers and Giants dominated the proceedings in the early innings. Eventually, the Giants made the most of their opportunities against a pesky Dodgers team and pulled away for the victory. 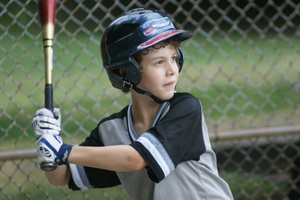 Cormac (6) of the Giants delivered a clutch RBI double in the third to spark his team. Cormac also walked twice and scored two runs.

Giants starter Jonathan (1) spun his magic in the top of the first as he held the Dodgers off the scoreboard with a two strikeout effort.

The Giants scored in the bottom of the first to spring ahead 1-0. Jonathan (1) led off the inning with a walk and took advamtage of a pair of wild pitches to reach third. A subsequent pair of one out walks issued to the Giants loaded the bases. With two outs, Laine (14) exercised great discipline at the plate and drew a bases loaded RBI walk to bring Jonathan home with the first run of the game.

However, Dodgers starter Everett (4) regained his composure and limited the potent Giants offense to one run. Everett cooly extricated himself from a bases loaded jam with two strikeouts and a groundout.

In the top of the second, the Dodgers answered back with a run. Everett (4) led off the inning with a single and promptly stole two bases to reach third. Everett came blazing home with the tying run on a Giants throwing error. However, Giants southpaw reliever John (12) limited the Dodgers offense to a run with a strong three strikeout performance.

Dodgers starter Everett was stellar in the bottom of the second as he weaved his spell against the Giants offensive machine. Everett threw a scoreless inning and struck out three Giants. 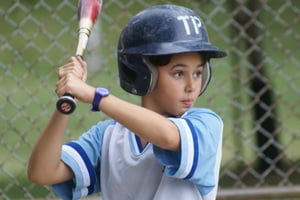 Emma (12) of the Dodgers drew three walks in four plate appearances while scoring one run.

Giants reliever Maxwell (7) answered back in the top of the third with a powerful counterpunch. Maxwell mowed down the Dodgers in 1-2-3 fashion with three strikeouts to keep the game tied at 1-1.

In the bottom of the third, the slumbering Giants offense awoke with tsunami ferocity, as it scored four runs to surge ahead 5-1. John (12) led off the inning with a walk. Cormac (6) delivered a clutch RBI double that allowed John to come home with the go ahead run. Christian (4) followed with a single. A subsequent attempt by the Dodgers catcher to erase Cormac’s steal of third sailed down the third baseline. The resulting error allowed both Cormac and Christian to come home. With nobody out, the Giants exercised patience at the dish to load the bases. A bases loaded walk to Number 2 of the Dodgers allowed Laine to waltz home with the Giants final run of the inning.

The pesky Dodgers battled back with a run in the top of the fourth to trim the deficit to three. Emma (12) drew a one out walk and immediately advanced to third on a pair of stolen bases. After a walk to Michael (3), Everett delivered a RBI single that brought Emma home.

Subsequently, Giants reliever Noel (10) regained his composure and subdued a dogged Dodgers rally attempt. At the turning point of the game, Noel escaped from a two out bases loaded pickle when he coaxed a Dodger to hit into a fielder’s choice. Noel cooly fielded the ball and threw a strike to Giants catcher Maxwell for the force out at home to record the third out.

The Giants took advantage of four consecutive walks and a series of defensive miscues by the Dodgers in the top of the fifth to score four insurance runs to widen their lead to 9-2.

In the top of the fifth, Giants closer Maxwell icily slammed the door on any Dodgers comeback with a workmanlike effort to seal the deal.

EXTRA INNINGS: Kudos to Giants pitcher Maxwell (7) for throwing two scoreless innings. Maxwell picked up the win with a four strikeout effort (2 IP; 0 R; 0 H; 1 W; 4 K) against the Dodgers; Kudos to Dodgers starter Everett (4) for pitching a solid two innings. In his starting role, Everett allowed only one run while striking out four Giants. Everett also had a 2 for 4 effort at the plate with a RBI and a run scored; Kudos to Giants starter Jonathan (1) for tossing a scoreless first inning while striking out two Dodgers. Additionally, Jonathan also drew two walks in three trips to the dish and scored two runs; Kudos to Emma (12) of the Dodgers for drawing three walks in four plate appearances and scoring a run; Kudos to Giants reliever John (12) for tossing a strong second inning. John allowed only one run while striking out three Dodgers. John also had a great game at the plate with a single, two walks, and two runs scored; Kudos to Giants reliever Noel (10) for his grace under pressure effort in the fourth. Noel allowed only one run and struck out two as he doused a bases loaded Dodgers uprising; Kudos to Cormac (6) for his double in the third to kick strart the Giants offensive charge. Cormac also drew two walks and scored two runs (plus, catching a solid two innings for the Giants behind the plate); Kudos to Dodgers catcher Oliver (9) for putting in a strong effort behind the plate for his undermanned team.