IN AN EXCITING TITANIC BATTLE, THE JAYS STELLAR PITCHING, SOLID DEFENSE AND OPPORTUNE OFFENSE ALLOWED THEM TO PREVAIL OVER THE PESKY ORIOLES TO WIN THE CHAMPIONSHIP FINAL AT CHRISTIE PITS 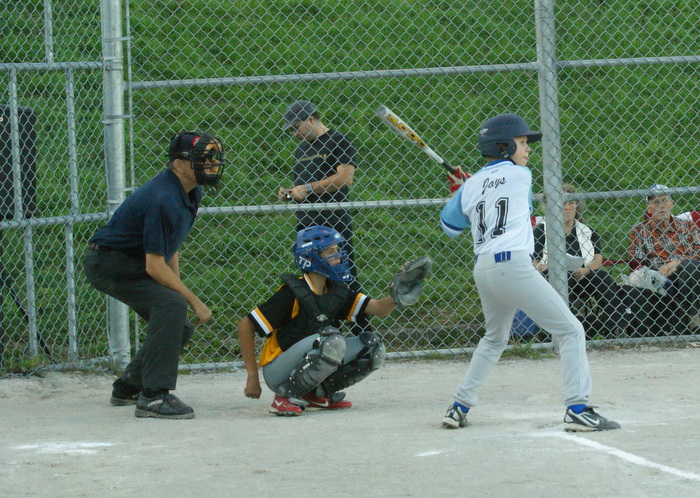 THE DELIVERY MAN > Jacob (11) is poised to deliver a 2 RBI sacrifice hit in the third inning that would propel the Jays to a 3-0 lead over the Orioles at Christie Pits Diamond 2. Jacob would also later deliver the game winning run in the fifth inning with another RBI sacrifice hit for a 3 RBI game at the plate. (Photo courtesy of Amanda Coelho)

Beneath beautiful blue skies this evening at Christie Pits Diamond 2, the Jays prevailed over the Orioles 6-3 in an exciting and well contested 5 ½ inning championship final to win the 2012 Toronto Playgrounds Peewee Division Championship. 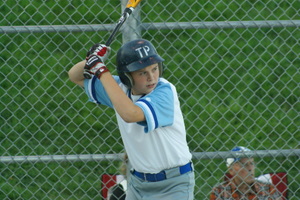 Reid (13) hit a majestic two run home run over the Dominico Field fence in left field in the fifth inning to salt the game away for the Jays.

With two runners on base and nobody out, Jacob (11) delivered a clutch sacrifice hit (6-3) in the bottom of the fifth that broke a 3-3 tie and allowed Keegan (2) to motor home from third base with the Jays winning run.

With Sam (15) standing at third, Reid (13) added some insurance runs for the Jays when he immediately followed with a powerful and majestic 2 RBI home run blast to left field, which easily carried over the chain linked fence at Dominico Field (a.k.a. Diamond 1). His shot brought his teammates out of the dugout to congratulate him and the fans in attendance to their feet to marvel and celebrate the homer.

In the top of the sixth, Jays closer Reid (13) doused the embers of any Orioles comeback hopes as he struck out two to seal the championship deal. 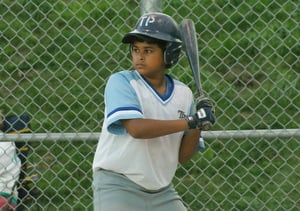 Sajith (8) broke a 0-0 tie when he delivered the Jays first run of the game in the third inning with a clutch sacrifice hit.

In was a scoreless titanic battle for the first two and a half innings as both teams matched one another pitch for pitch and tooth and nail.

Jays starter Keegan (2) pitched two solid innings as he kept the O’s off the scoresheet with a five strikeout effort.

However, Orioles starter Noah (15) threw two stellar innings to keep the Jays off the scoreboard with a six strikeout performance.

Jays reliever Sam (15) powerfully struck out two Orioles in the top of the third to keep the game scoreless.

In a game where runs were at a premium, the Jays made the most of their opportunities in the bottom of the third to score three and surge ahead 3-0. After Jack (1) had drawn a leadoff walk and stolen two bases to reach third, Sajith (8) delivered a clutch RBI sacrifice hit that allowed Jack to blaze home with the first run of the game. 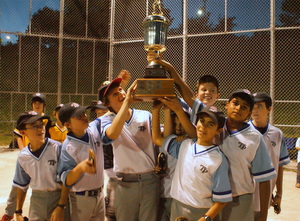 After Keegan was hit by a pitch and Sam walked to put two Jays on base, Jacob stroked a grace under pressure 2 RBI sacrifice (6-3) hit that allowed Keegan and Sam to come homeward bound.

However, the pesky Orioles battled back with two runs in the top of the fourth to trim the margin to 3-2. The O’s took advantage of three walks, a hit batsman, and a pair of wild pitches to close the gap to one.

Orioles reliever Simon (1) kept the Jays off the scoresheet in the bottom of the fourth with a workmanlike two strikeout effort.

With the game on the line, O’s tenaciously rallied with a run in the top of the fifth to tie the proceedings. After Ben (4) and Connor (12) drew walks to lead off the inning, Malcolm (14) delivered a clutch RBI sacrifice hit (1-3) that allowed Ben to zoom home with the tying run.

In the top of the sixth, Keegan led off the inning with a single down the third base line. Sam followed him onto the basepaths with a walk.

It was at this juncture in the game, where Jacob stared out into the horizon from the batter’s box at Diamond 2 and came face to face with destiny.

The TP Baseball Committee wishes to commend Orioles Coaches David Lam and Rob Ball, and all the Orioles players on a great season.

The Committee wishes to congratulate Jays Coaches David Hammond and Paul Kelly for guiding this talented group of players to such great heights of achievement in 2012.