IN A NAILBITER, THE CUBBIES TAME THE BUCCANEERS TO WIN THRILLING CHAMPIONSIP GAME AT CHRISTIE PITS 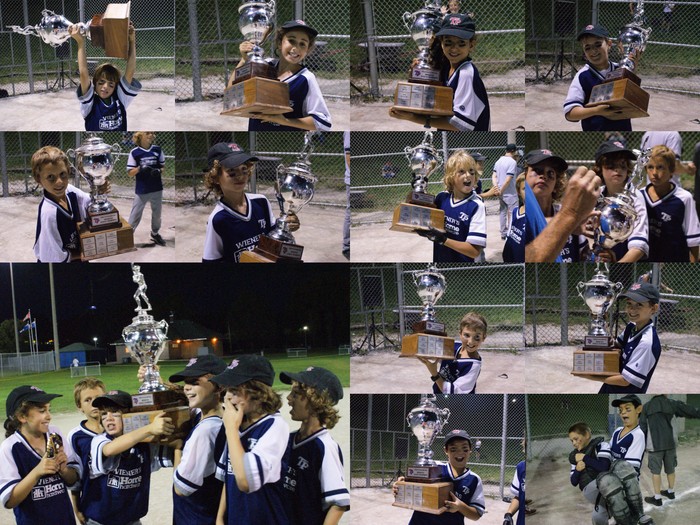 CHAMPIONSHIP CELEBRATION > The Cubs enjoy the fruits of victory at Christie Pits Diamond 2. 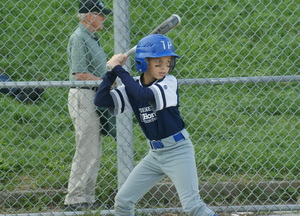 Angus (1) powered a majestic 2 run home run to left field in the fourth inning to stake the Cubs to 7-6 lead. Angus went 2 for 2 at the dish with 3 RBI’s.

Beneath beautiful warm skies at Christie Pits Diamond 2 this evening, the Cubs edged the Pirates 8-7 in a thrilling and well contested 4 ½ inning final to win the 2012 Toronto Playgrounds Mosquito Division Championship.

Trailing 6-5, the Cubs rallied in dramatic fashion in the bottom of the fourth. With one out and a runner on base, Angus (1) powered a majestic two run home run over the yellow roped barrier fence in left field to put the Cubbies back in front 7-6. The home run shot brought his teammates out the third base dugout to joyously congratulate him, and the 74 fans in attendance to their feet to celebrate the achievement.

After Joey (11) had drawn a walk and stolen second, Solomon (4) stroked a clutch RBI double into the outfield that allowed Joey to motor home with an insurance run that widened the Cubs lead to 8-6. 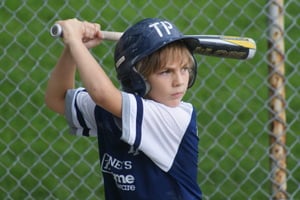 Solomon (4) hit a RBI double in the fourth inning that brought Joey (11) home with the Cubs eventual game winning run.

In the end, the Cubs would need every run that they fought tooth and nail to earn to fend off the gnarly Buccaneers.

Refusing to surrender, the swashbuckling Pirates doggedly rallied for a run in the top of the fifth to trim the deficit to one. Nigel (6) led off the inning with a double and proceeded to steal third base. However, the throw to nab Nigel at third from the Cubs catcher sailed wide and Nigel was able to scoot home and trim the margin to 8-7.

With one out and protecting a slender one run lead, Cubs closer Max (7) regained his composure and cooly struck out the final two Pirates to seal the championship deal.

The championship game was a highly entertaining and spirited seesaw battle between two well balanced teams. 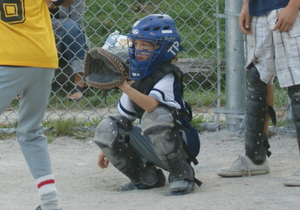 Cubs catcher Ethan (13) was the catalyst in two back to back 2-5 defensive gems as he threw out two Pirates attempting to steal third base in the second inning.

In the top of the first, the Pirates scored a run to jump out to an early 1-0 lead. With two outs and the bases loaded, Aaron (5) stroked a RBI single that brought in Adam (15) from third with the first run of the game.

However, Cubs starter Angus (1) finally found his rhythm after loading the bases, as he extricated himself from a mojo jojo bases loaded jam (resulting from three walks) by icily striking out three Pirates to close out the inning.

The Cubs answered back with ferocity in the bottom of the first as they scored three to take the lead 3-1. With the bases loaded, Max (7) stroked a 2 RBI double that allowed Josh (10) and Jake (14) to hustle home and  put the Cubbies in front 2-1. With two outs, Angus (1) delivered a RBI single that brought Jack (9) home from third.

Despite garnering four walks in the top of the second, the Pirates were unable to take advantage as the Cubs defense came to forefront to diffuse the threats and keep the Bucs off the scoresheet. Two consecutive Pirates baserunners attempting to steal third were erased on a pair of great 2-5 putout throws from Cubs catcher Ethan (13) to third baseman Solomon (4). 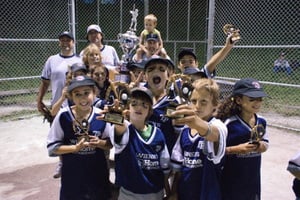 The Cubs added another run in the bottom of the second to widen their lead to 4-1. Solomon drew a one out walk and eventually came around to score after a wild pitch, a ground out and a Pirates error.

However, the Pirates rallied in dramatic jolly roger fashion with four in the top of the third to retake the lead 5-4. With the bases loaded, Jian (4) delivered a grace under pressure 2 RBI single that allowed Adam and Quinn (12) to score. Lucas (14) zoomed home from third with another run on a wild pitch by the Cubs. Aaron followed with a sacrifice hit (4-3) that allowed Jian to motor home with the Bucs final run of the inning.

In the bottom of the third, the Cubs answered back with a run to square the game 5-5. With no outs and  two runners on base, Josh (10) delivered a RBI fielder’s choice hit that allowed Adam (2) to blaze home with the tying run.

The Pirates battled back with sea dog tenacity in the top of the fourth to retake the lead 6-5. Piper (2) led off the inning with a double and came home to score after a pair of wild pitches. Cubs reliever Max minimized any further looting by the Bucs with a strong two strikeout effort.

With one out and trailing by one in the bottom of the fourth, Griff (3) drew a walk for the Cubs and stole second.

And it was this juncture in the proceedings where Angus stood in the batter’s box…Joey took his swings in the on deck circle…and Solomon awaited in the hole… that these three young boys awaited their moment with destiny.

The TP Baseball Committee wishes  to commend Pirates Coaches Joe Sala, Jenny Foster and Max Panitch, and all the Buccaneer players on a great season. Way to go, Pirates!

The Committee wishes to congratulate Cubs Head Coach Matt Byrnes, Assistant Coaches Mike Pett and Derek Ryan for guiding this talented group of players to such great heights of achievement in 2012.