BACKED BY SOLID PITCHING AND AN OPPORTUNE OFFENSE, TORONTO PLAYGROUNDS DEFEATED THE CARDINALS FOR THEIR SECOND EBA WEST SELECT LOOP VICTORY OF THE SEASON

On a breezy and cool evening down at Christie Pits Diamond 2 tonight, the TP Mosquito Selects defeated the Royal York (2) Cardinals 14-2 in 4½ innings of EBA West Select Loop action to win their second game of the season. 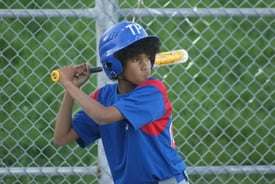 Using a combination of solid pitching and opportunistic offense, a focused and determined Toronto Playgrounds squad continued to build on an early lead throughout the game and never looked back.

The Cardinals threatened early in the top of the first inning as they loaded the bases on a lead off single and two walks. However, with nobody out, TP starting pitcher Aaron (23) eventually found his rhythm and extricated himself from a mojo jojo pickle by striking out the next two batters and inducing Josh (1) of the Cards to fly out to right field for the third out to keep them off the scoreboard.

In the bottom of the first, the Mosquito Selects made the most of their chances and jumped out to an early 2-0 lead. Leadoff hitter Nigel (20) motored home from third with the game’s first run on a wild pitch from Royal York starter Finn (17). With one out, Aaron (23) delivered a sacrifice hit to first that allowed Isaac (8) to come home.

Royal York managed to get two batters on base in the top of the second on a pair of walks. But, TP starter Aaron rose to the occasion and struck out three Cardinals to preserve the Mosquito Selects two-run lead.

The Mosquito Selects exercised major league discipline at the plate in the bottom of the second and scored five runs to extend their lead to 7-0. Taking advantage of six walks and five Cardinal miscues (two errors, a wild pitch & two dropped third strikes), Toronto Playgrounds sent eight batters to the dish to solidify their control of the proceedings.

TP starter Aaron continued his stellar pitching effort against Royal York in the top of the third as he mowed down the Cardinals in 1-2-3 fashion with two strikeouts.

Toronto Playgrounds added three more runs in the bottom of the third to stretch their advantage to 10-0. Aaron cooly delivered another sacrifice hit to bring Oliver (24) home with the inning’s first run.

With two outs, Leandro (10) hit a hard chopper in the dirt that the Royal York first baseman was unable to field cleanly and that allowed Louis (16) to slide home with another run. With the bases loaded, Tillie (9) worked the count in her favour and drew a walk that allowed Leandro to saunter home with the third run.

In the top of the fourth, the Cardinals offence finally ignited as they scored two runs to trim the margin to 10-2. Alex (13) of Royal York powered a two-run inside the park home run to the nether regions of centre field.

However, a strident Toronto Playgrounds team answered back with four runs in the bottom to the fourth to put the game out of reach. The Mosquito Selects sent ten batters to the dish and took advantage of six walks to widen their lead to 14-2.

Despite loading the bases in the top of the fifth, TP closer Lachlan (28) eventually found the groove and icily struck out two Cardinals to seal the deal on the Mosquito Selects victory.

The undefeated Mosquito Selects (2-0) hit the road for their next game as they travel to Ravina Gardens to play Annette on Sunday, May 19 at 3:00 p.m.