IN A VERY TIGHT GAME, TORONTO PLAYGROUNDS PULLED AWAY FROM THE RIVERDOGS IN THE LATTER INNINGS TO WIN THEIR SECOND GAME OF THE EBA WEST SELECT LOOP SEASON 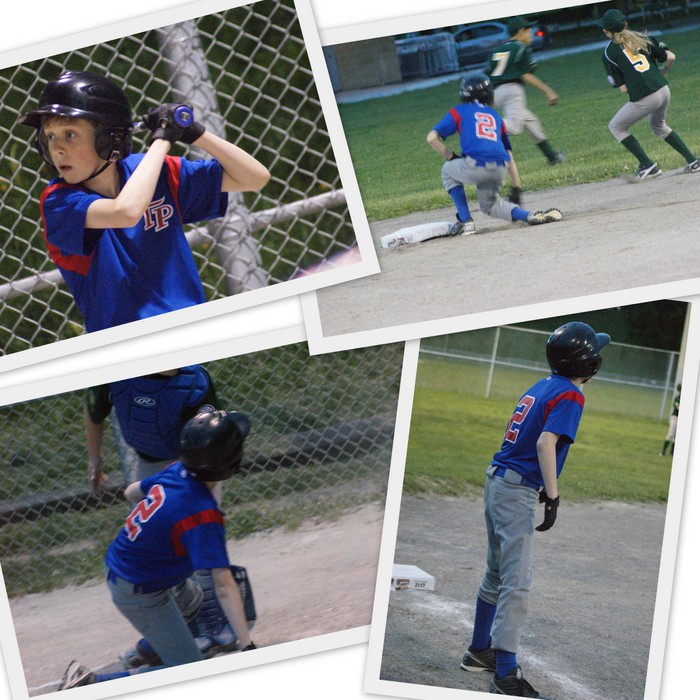 THE WINNING RUN > Clockwise from top left: With two outs and the score tied 3-3, Jacob (2) singled to get on base; whereupon he steals second; and advances to third on a throwing error by York catcher Daniel (21); on a wild pitch that bounced down the first base side, Jacob motored home and beat the tag as he slid safely into home with the winning run in the fourth inning.

Beneath cool and cloudy skies this evening at Christie Pits Diamond 2, our TP Minor Peewee Selects prevailed 8-3 over the York Riverdogs in a thrilling and taut five inning EBA West Select Loop showdown.

In a game where both teams exhibited great pitching and solid defense, runs came at a premium. The final result remained in doubt until the latter innings. 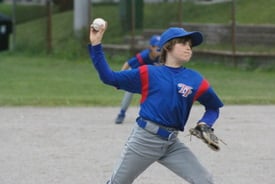 With the score tied 3-3 in the bottom of the fourth, Jacob (2) of the Minor Peewees exercised superb discipline at the plate and drew a two out walk. Once on base, Jacob immediately stole second base. As the throw to nab him from Riverdogs catcher Daniel (21) sailed high and went into centre field, Jacob picked himself up and motored into scoring position at third.

York relief pitcher Ian (13) followed with a wild pitch which bounced off the backstop and rolled down the first base line. Seizing the opportunity, Jacob bolted homeward bound like a jaguar and safely slid under the catcher’s tag in a cloud of dust to score the go ahead (and winning) run for Toronto Playgrounds.

In the top of the fifth, TP reliever Arlo (7) preserved the slender 4-3 lead as he deftly kept the Riverdogs off the scoresheet with a two strikeout effort.

Toronto Playgrounds also came up with a stellar defensive gem in the inning to help the cause. With a Riverdogs baserunner at second representing the potential tying run, Daniel (21) of York slashed a two out line drive to right field. As Anthony (19) of York turned third and headed home, TP right fielder Lucas (10) quickly retrieved the ball and made a cannon of throw directly to first baseman Jack (27) to record a spectacular 9-3 putout on Daniel to get the Minor Peewees out of the inning unscathed.

TP added four insurance runs in the bottom of the fifth to extend their lead to 8-3 and salt the victory away. With one out, Max (17) powered a RBI double to bring Adam (18) home. After a single by Jack, Sasha followed with 2 RBI double which brought Max and Jack homeward bound. With two baserunners on, Lucas stroked a RBI single to bring in Sasha with the inning’s final run.

In the top of the first, TP starter Max (11) threw a scoreless 1-2-3 inning as he struck out one Riverdog.

TP jumped out to an early 1-0 lead in the bottom of the first. With two outs and two Minor Peewees on base, Brian (25) delivered a clutch RBI single to bring Zack (32) home.

York took advantage of four walks and a single issued by TP to score two runs in the top of the second to take a 2-1 lead.

The Minor Peewees answered back with two runs in the bottom of the second to retake the lead 3-2. With two outs, Jacob brought Angus (45) home with the tying run when he reached base on fielding error by the York shortstop. Jacob eventually scored the go ahead run after a series of Riverdogs fielding miscues.

In workmanlike fashion, TP starter Max kept York off the scoreboard in the top of the third. The Minor Peewees turned a 9-3 putout (the first of two in the game by TP) in the inning. After Riverdogs leadoff hitter Anthony had lined a ball to right field, TP right fielder Jacob vacuumed up the ball and threw a laser strike to first baseman Jack to nab Anthony at first for the first out.

Despite loading the bases in the bottom of the third, Toronto Playgrounds was unable convert on any of their scoring opportunities.

The pesky Riverdogs tied the game 3-3 in the top of the fourth. TP reliever Arlo struck out two batters to keep York at bay.

And it was a this juncture in the proceedings in the bottom of the fourth, where Jacob stood in the batting circle and awaited his moment with destiny.

The Minor Peewee Selects (2-2-1) continue their homestand  at Christie Pits Diamond 2 next week when they host Bloordale on Wednesday, June 12 at 7:30 p.m.