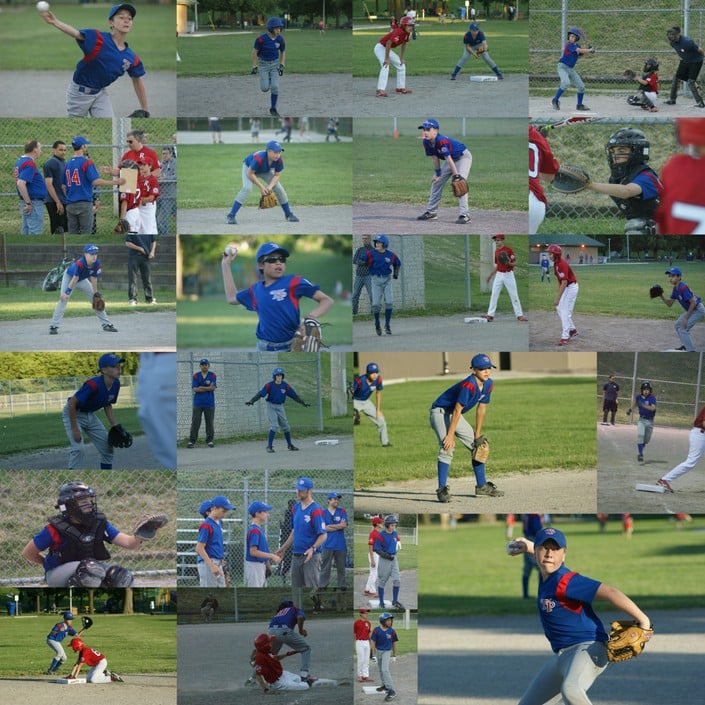 In a taut seesaw battle between two balanced teams, the Cardinals prevailed in the end when they were able to convert on the opportunities that were presented to them.

In the top of the first, Royal York jumped out to an early 1-0 lead. However, TP starting pitcher Magnus (19) found his rhythm and struck out two Cardinals to quell the uprising.

Toronto Playgrounds answered back with three in the bottom half of the inning to take a 3-1 lead. Ben (4) led off the inning with a walk and stole two bases to reach third. Simon (5) followed with a RBI sacrifice hit to bring Ben home and tie the game.

The Cardinals scored one in the top of the second to trim the deficit to one. However, some solid defensive play by the Major Peewees negated the Royal York offensive threat. TP reliever Jamie (2) helped his cause when he deftly threw to third to successfully pickoff David (22) of the Cards, who had wandered too far from base and record the second out of the inning. TP catcher David (20) followed with a laser throw to first base to nab the wayfaring Kreikor (49) of the Cardinals to record the third out.

TP scored a run in the bottom of the second to extend their lead to 4-2. After David drew a lead off walk, he proceeded to steal two bases and reach third. David motored home on a dropped third strike by Royal York.

However, the Cardinals exploded for five runs in the top of the third to retake the lead 7-4. Royal York was able to maximize their scoring opportunities when they were able to parlay a series of walks and TP defensive miscues into a big inning.

The Major Peewees doggedly battled back with two runs in the bottom of the third to trail 7-6. After Jack and Jamie had led off the inning with back to back walks, John Eric stroked a RBI sacrifice hit to bring in Jack. With two outs, Jamie zoomed home on a dropped third strike.

In the top of the fourth, Royal York responded with three insurance runs to widen their advantage to 10-6. The defensive highlight of the inning was a superb 8-3 putout made by Toronto Playgrounds. Kreikor of the Cardinals lined a hit to centrefield to lead off the inning. However, TP centrefielder Simon (5) corralled the ball and made a cannon throw directly to first baseman John Eric to retire the lumbering Kreikor for the first out of the inning.

Refusing to wave the white flag of surrender, TP gamely rallied for three runs in the bottom of the fourth to trim the deficit to one. With one out and two runners on base, Simon delivered a RBI sacrifice hit to score Nathan (10). Alex followed with a two out RBI single to bring David home. Alex eventually scored after a Royal York error.

With the tying run at second base, TP grounded into a 1-3 putout to end the game.

The Major Peewees take a break from the EBA Select circuit as the team heads off to partake in the Forest Glen Tournament this weekend (June 21-23).

The TP Major Peewee Selects (2-3-1) resume their EBA regular season on Wednesday, June 26 when they host Bloordale at Christie Pits Diamond 2 at 7:30 p.m.