FIRING ON ALL CYLINDERS, TORONTO PLAYGROUNDS POWERED THEIR WAY TO VICTORY OVER THE BOMBERS WITH A SEVENTEEN HIT ATTACK TO WIN THEIR THIRD GAME OF THE EBA SELECT SEASON 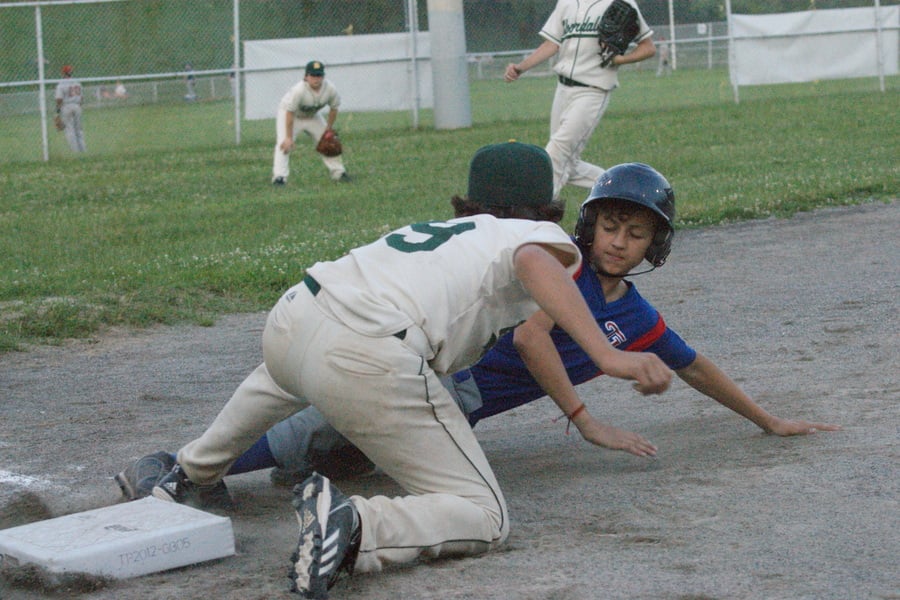 TP Major Peewee Select leadoff man Simon (5) deftly avoids the tag from Bloordale third baseman Liam (19) as he slides safely into third base in the fourth inning. Simon powered the TP offense by going 4 for 4 at the plate with four runs scored, 5 RBI’s and three steals.

Under hazy and humid skies this evening at Christie Pits Diamond 2, our TP Major Peewee Selects defeated the Bloordale Bombers 16-5 in five innings of EBA West Select Loop action to attain their third victory of the season. 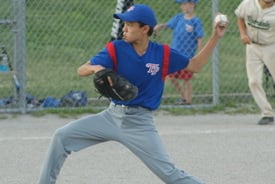 Firing on all cylinders, Toronto Playgrounds took care of business from the get go and played its best game of the season as they dominated the Bombers from start to finish both offensively and defensively.

The Major Peewee offense was relentless in its attack as they pounded out seventeen hits against five different Bloordale pitchers.

Meanwhile, two TP pitchers combined to limit the Bombers to only five runs and three hits during the game.

In the top of the first, TP starting pitcher John Eric (27) dictated the tone of the proceedings with a 1-2-3 inning. TP shortstop Simon (5) made two Gold Glove plays to record the first two outs on a pair of 6-3 putouts.

Toronto Playgrounds jumped out to an early 3-0 lead in the bottom of the first. After Simon led off the inning with a single, Jamie (2) followed with a RBI single to bring Simon home with the first run of the game. 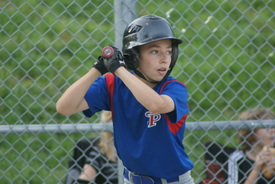 Alexander (9) followed with a RBI single to bring Jamie home. Next, David (20) delivered a run scoring sacrifice hit that allowed Alex to score.

John Eric pitched a scoreless top of the second as he struck out two Bombers to preserve TP’s three run advantage.

The Major Peewees scored four in the bottom of the second to widen their lead to 7-0. With two outs and Ben (4) on third, Simon powered a clutch RBI triple to the nether regions of centrefield to score Ben. Jamie followed with a RBI single that brought Simon home.

After Alexander reached base on an error by the Bloordale third baseman, David delivered a two RBI double that allowed Jamie and Alexander to come homeward bound.

The Bombers were unable to solve the stellar pitching of John Eric once again in the top of the third as he kept them off the scoreboard with a two strikeout effort. 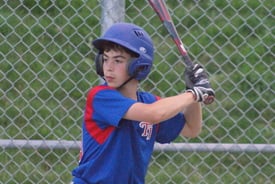 TP added another two runs in the bottom of the third to stretch their margin to 9-0. After a lead off single by Jack (13), John Eric delivered a RBI single to bring him home. With one out, Nathan (10) stroked a RBI single to score John Eric.

In the top of third, the Bloordale offense found its bearings and scored three runs to trim the deficit to six. However, TP reliever Alexander eventually found his rhythm and struck out two Bombers to quell the uprising.

The Major Peewee offense continued its hot hitting ways in the bottom of the fourth as they scored three to increase their lead to 12-3. With one out and Magnus (19) on base, Simon stroked a RBI single to bring him home. After Jamie drew a walk, Alexander delivered a 2 RBI double to bring Simon and Jamie homeward bound.

The Bombers answered with a pair of runs in the top of the fifth to trail 12-5. Some strong TP defense diffused the Bloordale comeback attempt.

Toronto Playgrounds added four more insurance runs in the bottom of the fifth to salt the game away. With the bases loaded and one out, Simon delivered a 3 RBI bases clearing triple that allowed Nathan, Ben and Magnus to motor homeward. A subsequent Bloordale error would allow Simon to saunter home with the final run of the game.

The Major Peewee Selects (3-3-1) travel to Pelmo Park to play their next game on Wednesday, July 3 against Weston at 7:00 p.m.