IN AN EXCITING TORONTO PLAYGROUNDS FAMILY AFFAIR AT CHRISTIE PITS, THE MINOR PEEWEES FEND OFF A FEROCIOUS MAJOR PEEWEE RALLY ATTEMPT IN THE FINAL INNING TO HANG ON FOR THEIR THIRD VICTORY OF THE EBA WEST SELECT LOOP SEASON 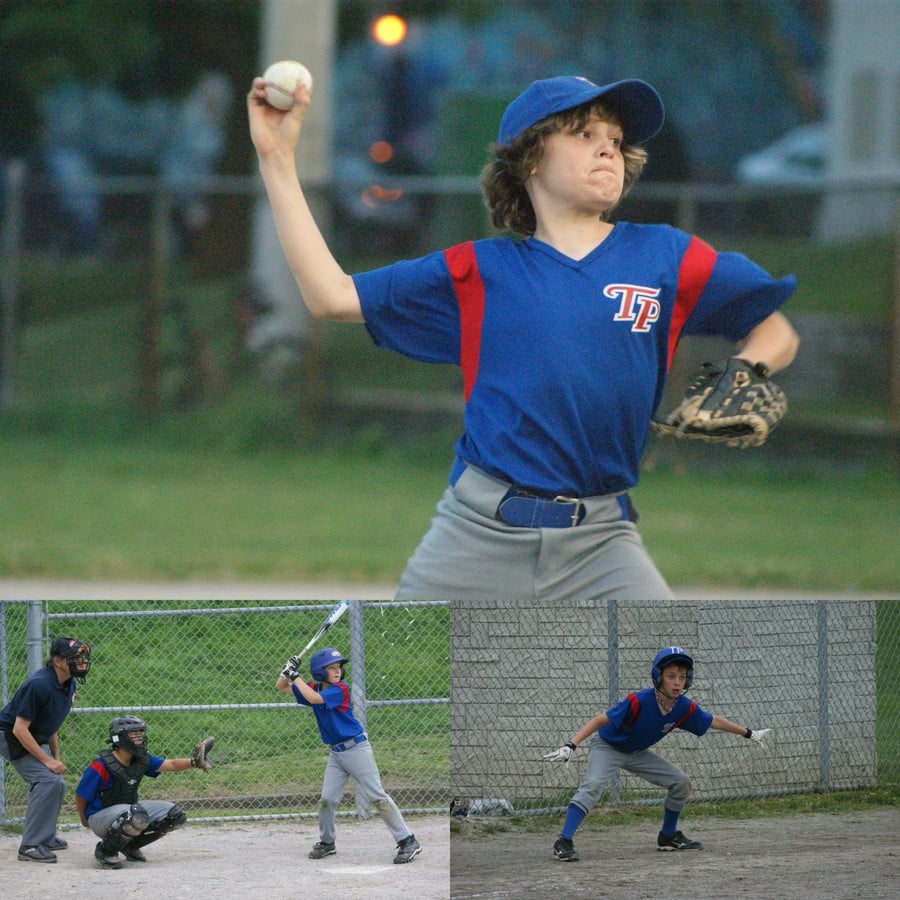 Clockwise from top: With some all star defensive play from his teammates, TP Minor Peewee Select starting pitcher Max (17) threw four stellar innings where he surrendered only two runs to the Major Pewee Selects and picked up the victory [4 IP, 2 ER, 5 H, 2 W, 1 HB, 2 K’s]; With Cam (88) awaiting at third base, Owen (12) stroked a clutch two out RBI single in the fourth inning to bring Cam home with the Minor Peewees winning run.

Under the lights on a nice summer evening at Christie Pits Diamond 2, the TP Minor Peewee Selects prevailed 9-7 over the TP Major Peewee Selects in 5 ½ entertaining innings of EBA West Select Loop action. 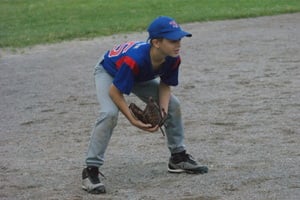 Minor Peewee third baseman Angus (45) was in Gold Glove form at the hot corner against the Major Peewees. Angus also delivered a 2 RBI single in the third that tied the game.

In a family affair battle between two talented Peewee Select teams, both Toronto Playgrounds squads displayed solid pitching, strong defense and an opportune offense during the proceedings in their quest for bragging rights on the diamond.

With some all star defensive contributions from his teammates, Minor Peewee starter Max (17) pitched a scoreless top half of the first.

TP Major Peewee starter John Eric (27) and his defense replied in kind in the bottom of the first as they held the Minor Peewees off the scoreboard in 1-2-3 fashion.

In addition to two 1-3 putouts made by John Eric, the defensive highlight of the inning was a laser throw from Major Peewee catcher Jamie (2) to his third baseman Thomas (23), who adroitly tagged out Jack (27) of the Major Peewees attempting to steal third to record the second out.

The Major Peewees opened the scoring in the top of the second as they jumped out to a 2-0 lead. With two outs, Elena (17) and Thomas respectively reached base on a hit by pitch and a single to put two runners on base. Magnus (19) followed with a clutch two RBI single to bring in the game’s first two runs. 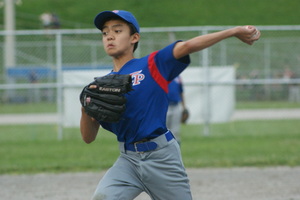 Backed by some solid defensive play, Major Peewee pitcher John Eric kept the Minor Peewees off the scoring ledger in the bottom of the second.

In the top of the third, Minor Peewee starter Max and his defense retired the Major Peewees in 1-2-3 fashion to keep them off the scoresheet.

The Minor Peewee made the most of the opportunities in the bottom of the third as they sent eleven batters to the dish and exploded for seven runs to take a 7-2 lead.

With two outs and two Minor Peewees on base, Angus (45) delivered a clutch two RBI single to bring Cam (88) and Owen (12) home and tie the game.

After Zack (32) drew a walk, Jack (27) powered a two RBI triple to the deep dish pizza nether regions of the outfield to score both Angus and Zack and propel the Minor Peewees into a 4-2 lead. 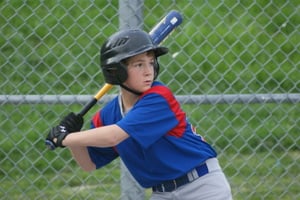 In three plate appearances, Thomas (23) went 2 for 3 for the Major Peewees with two runs scored and 2 RBI’s.

Exercising great discipline at the plate, Sasha (28) and Jacob (2) drew respective walks to load the bases. Lucas (10) followed with a RBI walk to bring in Jack. With the score 5-2, Arlo (7) delivered a clutch two RBI double to bring Sasha and Jacob homeward bound to close out the scoring.

With grit and determination, Minor Peewee starter Max held the Major Peewees off the scoring abacus in the top of the fourth.

The defensive gems of the inning were a pair of Gold Glove 5-3 putouts at the hot tamale corner initiated by Minor Peewee third baseman Angus.

The Minor Peewees added an insurance run in the bottom of the fourth to stretch their advantage to 8-2. With two outs, Owen hit a clutch RBI single to bring Cam home.

With his defense doggedly backing him up, Minor Peewee reliever Owen (12) threw a scoreless top to the fifth to preserve his team’s six run lead. Third baseman Angus made a super catch on high popper to record the second out. 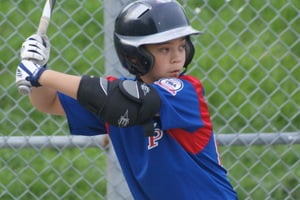 In the bottom of the fifth, the Minor Peewees scored again to widen their lead to 9-2. After Zack had drawn a one out walk and stolen a pair of bases, he came home on a dropped third strike by the Major Peewees.

Bloodied and with their backs against the wall in the top of the sixth, the Major Peewees refused to go quietly into night as they gamely fought back with five runs to trim the deficit to two.

Trailing 9-7, the Major Peewees would not wave the white flag of surrender as Simon patiently drew a walk to load the bases.

With the game on the line, Minor Peewee closer Owen summoned all that he had left in his reserve tank and induced the next Major Peewee batter to ground into a fielder’s choice to end the game.