UNDER THE LIGHTS IN THE HEAT OF THE NIGHT, THE A’s PREVAIL OVER TORONTO PLAYGROUNDS IN A SCORCHER AT CHRISTIE PITS 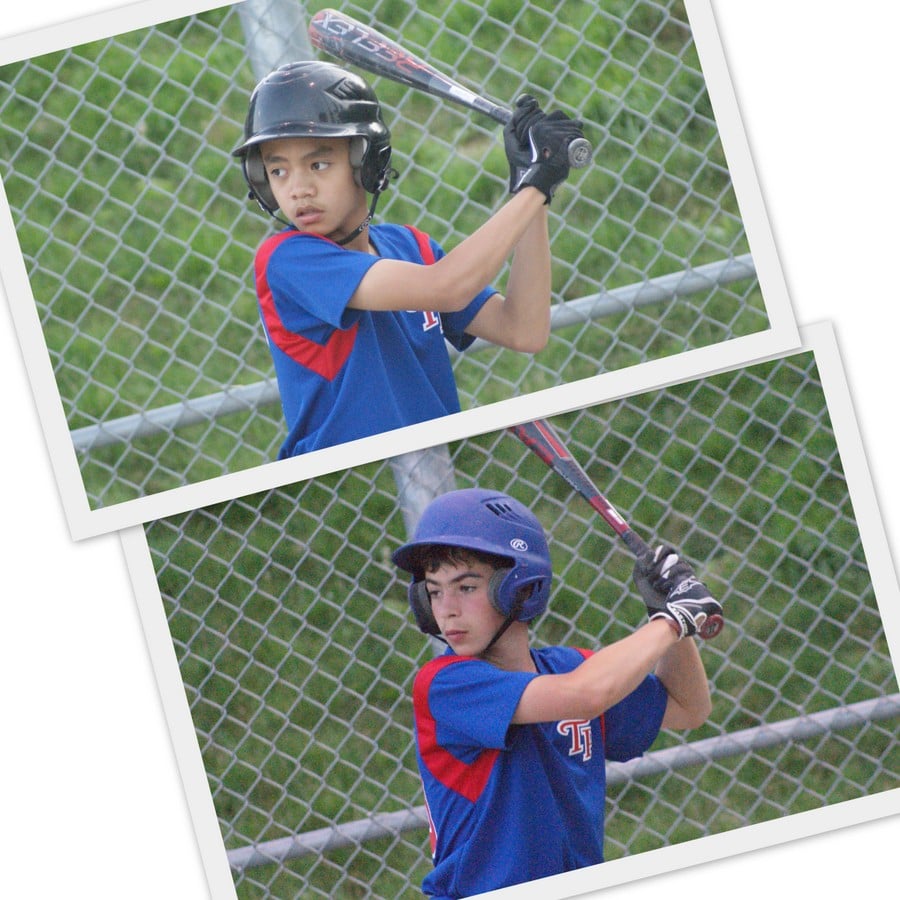 LEFTY POWER > Top to bottom: John Eric (27) sparked the Major Peewees offense with a 3 for 4 effort at plate (single, two doubles) and two runs scored. John Eric also pitched two stellar innings of relief where he allowed only one run while striking out three; In four plate appearances, David (20) went 2 for 3 (two triples, walk) at the dish as he powered TP with 3 RBI’s and two runs scored.

On a hot and humid evening under the lights at Christie Pits Diamond 2, the Annette A’s edged our TP Major Peewee Selects 10-9 in a scorching six inning EBA West Select Loop showdown. 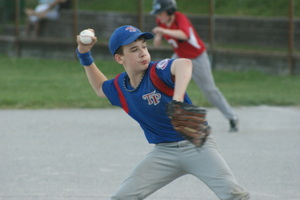 Trailing 8-1 after four innings, the A’s doggedly battled back in the final two innings to ultimately prevail over Toronto Playgrounds in a highly entertaining affair between two talented squads.

In the top of the first, TP starting pitcher Tyler (7) threw a scoreless inning with some defensive assistance from his teammates to keep Annette off the scoreboard.

TP second baseman Ben (4) a.k.a. ‘Shruggie’ and third baseman Alex (9) deftly battled the bright glare of a setting sun to catch respective sky high pop ups to record the first two outs. Right fielder Jamie (2) initiated a nice 9-3 putout with first baseman Nathan (10) for the third out of the inning.

The Major Peewees offense exploded out of the gates in the bottom of the first to spring out to an early 4-0 lead. With two runners on base, Alex (9) stroked a RBI single to bring home John Eric (27) with the first run of the game.

With one out and two runners on base, David (20) delivered a sizzling two RBI triple to allow Ben and Alex to motor homeward. Three batters later and with the bases loaded, David came home on an Annette fielding error.

Once again, TP starter Tyler kept the A’s off the scoring ledger in the top of the second with some more all star defensive plays from his team. 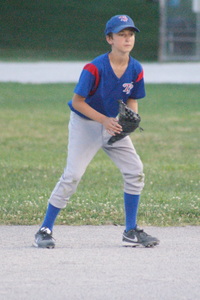 TP second baseman Ben (4) a.k.a. ‘Shruggie’ was in Gold Glove form all night long as he made several highlight reel defensive gems against Annette.

Second baseman Ben turned a nice 4-3 putout with first baseman Jack (13) for the first out. After Rory (39) of Annette reached base on a single, TP catcher David (20) gunned him down with a cannon of a throw to third baseman Alex, who deftly applied the tag on a dead on arrival Rory to complete the 2-5 putout. ‘Shruggie’ followed with a Gold Glove catch on a scorching hot tamale line drive off the bat of Linden (30) of the A’s for the third out.

Toronto Playgrounds took advantage of a pair of Annette errors to add another four runs in the bottom of the second to widen their lead to 8-0. After a lead off double, John Eric came home on a fielding miscue by Annette’s second baseman. With one out, Alex came home to roost after an error by the A’s third baseman.

In the top of the third, TP southpaw reliever John Eric (27) struck out three with authority to keep Annette off the scoring abacus.

With some nice defensive play from his teammates, Annette reliever Mathias (34) kept TP off the scoreboard in the bottom of the third.

The A’s scored a run in the top of the fourth to trim the deficit to seven. However, some standout defensive gems by TP second baseman Ben doused the Annette comeback attempt. ‘Shruggie’ caught a rip roaring, smoking, sizzling hot liner off the bat of Eli (33) of the A’s for the first out. Ben followed that with a pair of Kirby Superstar 4-3 putouts with first baseman Jack to close out the inning.

Annette reliever Mathias kept the Major Peewees off the board in the bottom of the fourth with a two strikeout effort.

Trailing 8-1, the A’s offensive machine surged to life in the top of the fifth and scored seven to tie the proceedings 8-8. Annette took advantage of three walks and five hits in the inning to stage their miraculous comeback. The big blow was a three run home run blast off the bat of Cam (42) of the A’s.

In the bottom of the fifth, Annette reliever Mathias retired TP in 1-2-3 fashion with a strikeout and a pair of 1-3 putouts to keep the game tied.

The A’s scored a pair of runs in the top of the sixth to thrust themselves into a 10-8 lead.

Refusing to go down without a fight, TP continued to battle in the bottom of the sixth. With two outs, John reached base on a single. David followed with a clutch RBI triple to bring John home and trim the deficit to one.

With the potential tying run only seventy-five feet away, Annette closer Eli (33) struck out the next TP batter to seal the deal and the victory.