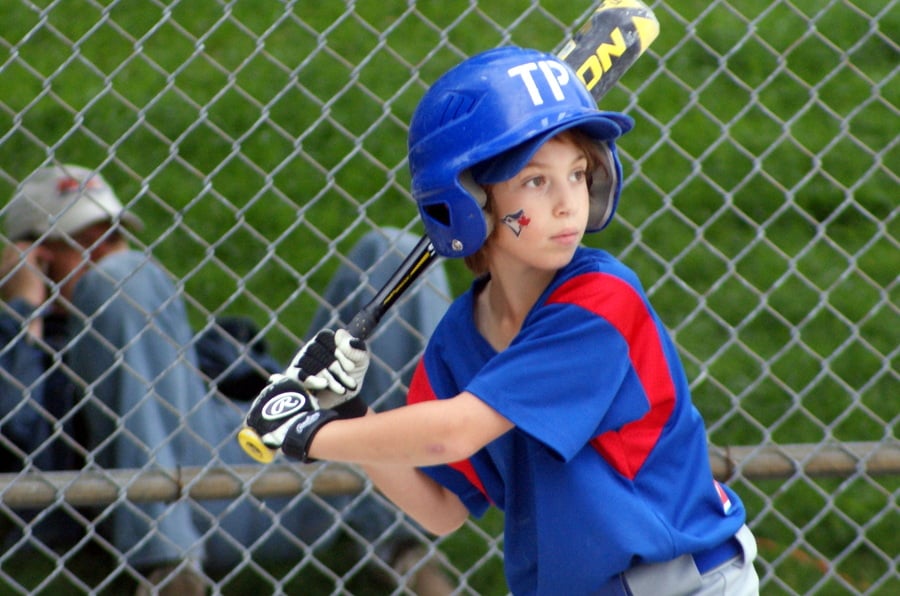 Aaron (21) sparked the TP Rookie Ball Selects offense with a two run home run in the third inning against Royal York. Aaron went 3 for 3 at the plate [two singles, home run] with 2 RBI’s. 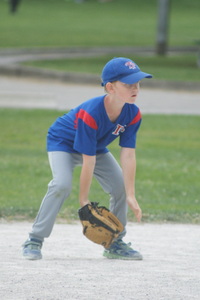 In a hard fought tooth and nail battle, Toronto Playgrounds built an 8-2 lead through the first three innings of play and utilized some solid defensive play in the latter innings to beat back several Cardinals rally attempts to hang on for the sweet…ever so sweet victory.

Some strong TP defense kept Royal York off the scoresheet in the top of the first. Spencer (15) made a nice catch on a high fly ball in centre field for the first out. First baseman Declan (13) vacuumed up a hard hit grounder for the third out.

The Rookie Ball Selects took an early 1-0 lead in the bottom of the first. After a one out single by Aaron (21), Jacob (7) followed with a RBI double to bring him home.

Royal York answered back with a run in the top of the second to tie the proceedings 1-1.

However, TP second baseman Jacob made a trio of Gold Glove defensive plays in the inning that short circuited the Cardinals offensive momentum. Jacob made a nice grab on a high pop fly to record the first out. In Kirby fashion, Jacob vacuumed up a nasty grounder and made a laser throw to first baseman Declan for the second out.

With two outs and two Cardinals on base, Jacob caught a sizzling line drive off the bat of Rio (13) of Royal York for the third out.

TP scored a run in the bottom of the second to take the lead 2-1. After a lead off single by Spencer, Eli (22) stroked a RBI double to deliver him home. 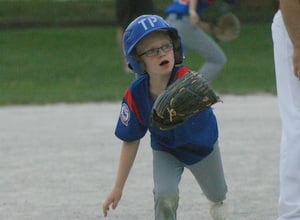 TP pitcher James (35) dives and snatches a hard line drive in his glove in the fifth inning.

Royal York charged back in the top of the third to tie the game 2-2. Once again, TP used some strong D in the inning to quell the Cardinals offensive thrust. Keying the defense were nice fly ball catches made by third baseman Aaron and shortstop Ishan (19).

Toronto Playgrounds put the pedal to the metal in the bottom of the third as they exploded for seven hits to produce six runs and surge ahead 8-2.

After a lead off single by Emmett (3), Aaron powered a super duper two RBI home run to the deep dish pizza nether regions of the outfield to put TP out in front 4-2.

In the top of the fourth, Royal York rallied for two runs to trim the deficit to four. Again, some good TP defensive play got them out of the inning without any additional damage.

With the Cardinals playing some strong defense themselves, TP was unable to score in their half of the fourth. 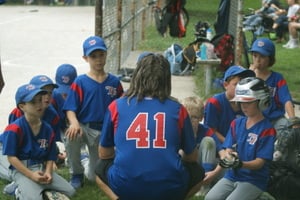 Refusing to surrender, the Royal York bats came to life in the top of the fifth with seven consecutive singles as the Cards stormed back with a vengeance to score three runs and trail 8-7. Once again, some solid TP defensive play got them out of the inning.

The highlight…the Rookie Ball Selects turned in a spectacular 9-4-5 putout. With Royal York’s Dominic (42) trying to stretch his one out RBI double into a triple, right fielder Luca (11) retrieved the ball and made a strong throw to his cutoff man, second baseman Jacob. Noticing Dominic greedily chugging for third, Luca made a laser throw to third baseman Aaron, who deftly applied the tag on a sliding Dominic to record the dead on arrival second out of the frame.

With the bats going Ice Station Zebra cold, Toronto Playgrounds went down in 1-2-3 fashion in the bottom of the fifth.

The TP defense and a Cardinals faux pas kept Royal York off the scoreboard in the top of the sixth as the Rookie Selects preserved their slender one run advantage.

With one out and the potential tying run at third, Jackson (87) hit a high fly ball to mid centre where TP Rover Spencer caught it for the second out.

Jackson’s fly ball was hit deep enough to allow Royal York’s Noah (10) to motor home with the supposed tying run. However, he was ruled out by the officiating umpire for his failure to slide at home plate.

Some strong Royal York defense and some frigid TP bats added up to no runs for the Rookie Ball Selects in the bottom of the sixth.

Leading by the slenderest of margins, the Toronto Playgrounds defense came up big once again in the top of the seventh to seal the deal on a hard fought victory. Second baseman Jacob and first baseman Declan combined on a pair of 4-3 plays for the first two outs. The game ended on a fielder’s choice.

The Rookie Ball Selects (4-6) will play their final regular season game on the road as they travel to Ravina Gardens on Tuesday, August 13 to battle the Annette A’s at 6:15 p.m.