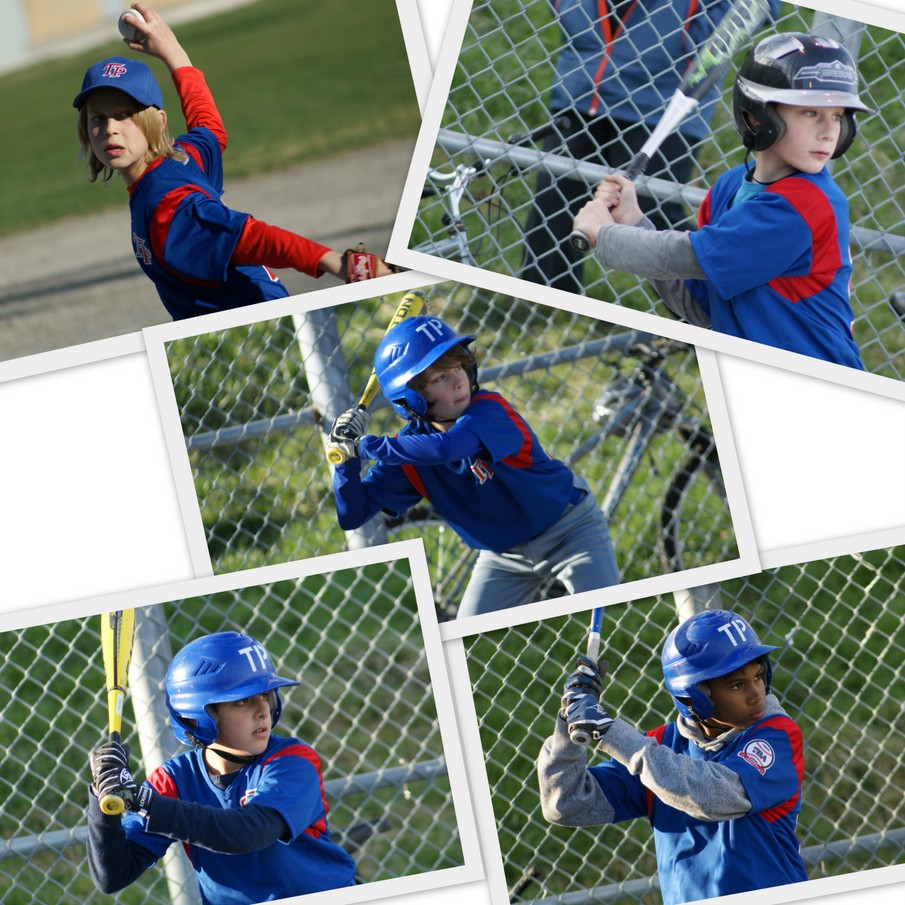 Clockwise from top left to centre: TP Mosquito Select reliever Louis (16) pitched two scoreless innings while striking out three A’s; Quinn (13) went 2 for 2 at the plate with two runs scored; Nigel (20) went 1 for 1 with a run scored; Leandro (10) went 1 for 1 while powering a RBI double and scoring a run; Jake (30) went 1 for 2 at the dish with a RBI.

The game was the regular season opener for both squads as the Etobicoke Baseball Association (EBA) began its 2014 Select loop regular season.

In a well played affair by both teams, the A’s eventually prevailed over TP because of some solid pitching, timely defense, and their ability to maximize the offensive opportunities that were presented to them during the proceedings.

In the bottom of the first, the Mosquito Selects were kept off the scoreboard as they were robbed of two sure hits by some stellar Gold Glove defense by the A’s.

TP reliever Louis (16) pitched a scoreless top of the second to keep Annette off the scoresheet. With one out and an A’s baserunner at third in scoring position, Louis dug deep into his reserves to strike out the next two Annette batters to extinguish the threat.

The Mosquito Selects rallied for a run in the bottom of the second to trim the deficit to four. Quinn (13) led off the inning with a single and eventually advanced to third on a wild pitch and a stolen base. At this point, Harris (12) drew a dropped third strike that allowed Quinn to motor home with TP’s first run of the game.

In the top of the third, TP utilized some strong defense to douse an Annette offensive thrust and keep them off the scoring ledger. Shortstop Aaron (18) teamed with first baseman Alden (7) on a bang bang 6-3 defensive gem to record the first out of the inning. Mosquito Select reliever Louis snared a hot shot back to the mound and cooly threw over to Alden to complete a 1-3 play for the second out.

With determination, TP scored a pair in the bottom of the third to trim the margin to 5-3. After a leadoff single by Nigel (20) to open the frame, Leandro (10) delivered a clutch RBI double to bring Nigel home. With two outs and two runners on base, Jake (30) stroked a RBI single that allowed Leandro to come homeward bound. However, with two Mosquito Select baserunners in scoring position, Annette starting pitcher Patrick (19) dug deep to mow down two batters to quell the TP uprising.

Annette put the pedal to metal in the top of the fourth as they feasted upon their opportunities with relish and scored four to widen their advantage to 9-3.

TP gamely rallied for a run in the bottom half of the fourth to trim the deficit to five.

The Mosquito Selects (0-1) will play their next game on Sunday, May 11 when they travel to Pelmo Park to face Weston.