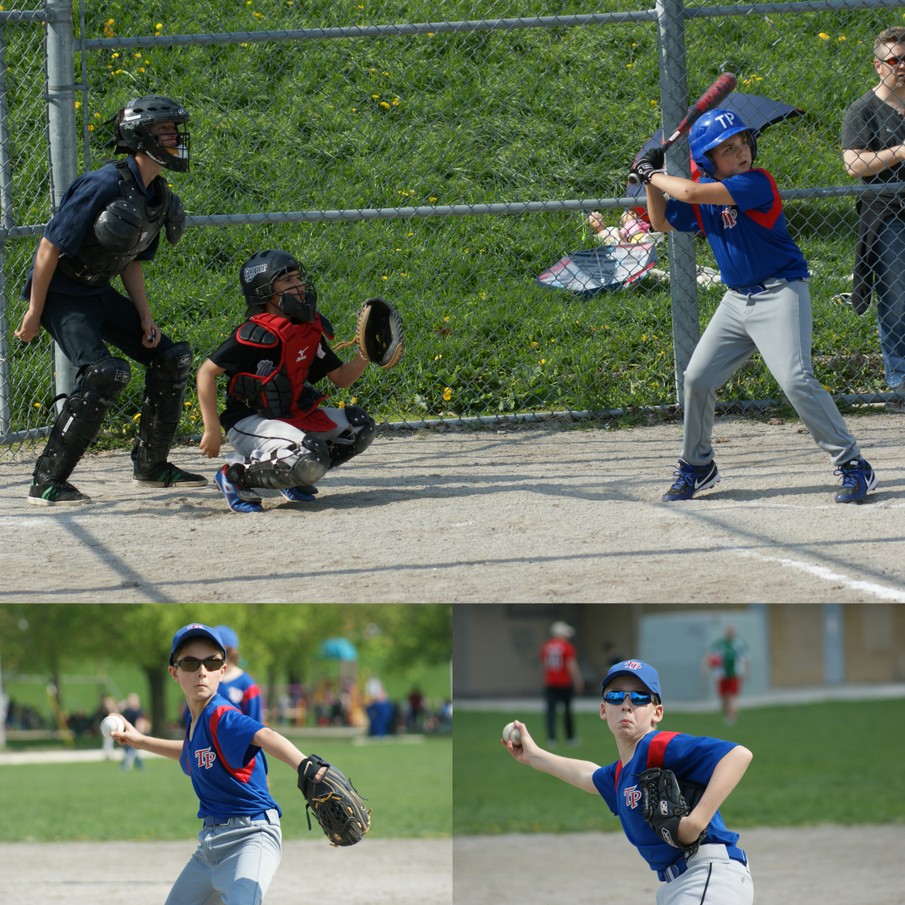 Clockwise from the top: With Umpire Sam Hull and Martingrove catcher Aaron (11) looking on, Alex (2) is poised to deliver a RBI triple in the third to launch TP into an early lead. Alex would deliver two triples during the game as he went 2 for 2 with two runs scored and 2 RBI’s to power the Mosquito Select offense; TP starter Alden (7) pitched a scoreless first while striking out three White Sox [1.0 IP, 0 ER, 0 H, 3 W, 3 K’s]; TP reliever Ben (4) tossed a scoreless second while mowing down three White Sox [1.0 IP, 0 ER, 0 H, 1 W, 3 K’s, 1 HB].

Beneath warm and sunny skies on a Victoria Day afternoon at Christie Pits Diamond 2, our Toronto Playgrounds Mosquito Selects defeated the Martingrove White Sox 9-6 in 4 ½ innings to earn their first victory of the 2014 Etobicoke Baseball Association (EBA) Select regular season.

In a hard fought battle against a pesky Martingrove team, Toronto Playgrounds displayed moments of gutsy pitching, strong defense, and opportune offense during crucial junctures to eventually prevail over their opponent. 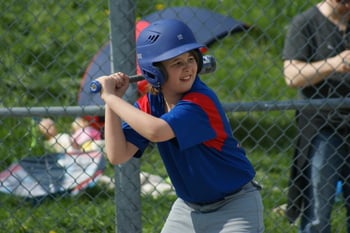 Backed by some clutch defensive play, five TP pitchers combined to strike out ten White Sox batters over five innings. In the meantime, the Mosquito Selects made the most of their offensive opportunities to score a season high nine runs.

After walking three Martingrove batters to load the bases in the top of the first, TP starter Alden (7) pitched himself out of the mojo jojo jam by striking out three White Sox to keep them off the scoresheet.

White Sox southpaw starter Cameron (23) kept TP off the board with a one strikeout effort in the bottom of the first.

Matingrove loaded the bases once again in the top of the second. However, Mosquito Select reliever Ben (4) mowed down three White Sox batters with authority to keep them off the scoring ledger.

Toronto Playgrounds jumped out to a 2-0 lead in the bottom of the second. After a lead off single by Alden, Alex (2) stroked an one out laser RBI triple to bring Alden home with the game’s first run. Harris (12) followed and delivered a RBI single to cash in Alex.

However, Martingrove answered back with four in the top of the third to take a 4-2 lead. With the score tied 2-2, Rickey (14) launched an one out 2 RBI triple to propel the White Sox in front.

Shaken, but not stirred, the Mosquito Selects heard the clarion call and rallied for five runs in the bottom of the third to retake the lead 7-4. With one out and two runners on base, Leandro (10) slashed a RBI single that allowed Adam (14) to score and trim the deficit to one. After a walk to Dylan (11) loaded the bases, a pair of defensive errors by the White Sox would allow Jashan (3) and Leandro to come homeward bound and put TP out in front 5-4. 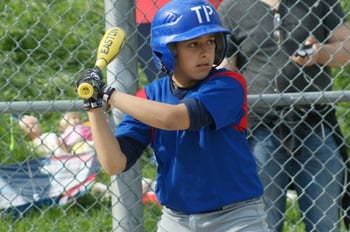 Trailing 4-2, Leandro (10) would deliver a RBI single to spark the Mosquito Selects five run rally in the third.

With a subsequent walk to Quinn (13) that put two runners on base, Martingrove misplayed a dropped third strike to Nigel (20) that allowed Dylan and Quinn to motor home with two more runs to widen the TP advantage to three.

After the White Sox scored a run in the top of the fourth to trail 7-5, Martingrove exercised great discipline at the dish to draw two walks to load the bases with no outs. However, with the game on the line, TP reliever Quinn induced Tristan (42) to hit into an inning killing triple play.

In the turning point of the proceedings, the TP defense came up with a stellar defensive gem to extricate themselves from a sticky wicket. The big play unfolded with Tristan hitting a sizzling line drive that TP first baseman Adam snared in the shoestrings of his glove to record the first out. With Matthew (10) wandering off first, Adam adroitly stepped on the bag for the force to record the second out. With Aiden charginging for home, Adam threw to TP catcher Dylan at the plate. However, Aiden had left third base without tagging up and Dylan cooly threw to third baseman Alex to complete the 3-2-5 triple play.

In the bottom of the fourth, the Mosquito Selects added two more insurance runs to widen their advantage to 9-5. With one out and a runner on base, Alex powered a RBI triple to bring home Jake (30). A subsequent defensive miscue by Martingrove would allow Alex to saunter home.

Refusing to surrender, the tenacious White Sox gamely fought back with a run in the top of the fifth to trim the margin to three. With one out and two runners on base, Rickey delivered a RBI single to bring in Jeremy (13).

However, the Toronto Playgrounds defense rose to the challenge to quell the Martingrove uprising. Mosquito Select second baseman Harris caught a smoking hot line drive off the bat of Tito (42) to record the first out. TP catcher Jake gunned down Gina (34), when she was attempting to steal third, with a laser throw to third baseman Alden who applied the tag to complete the 5-3 putout.

With the bases loaded, TP closer Louis (16) mowed down the final White Sox hitter to seal the deal on a hard fought victory.

Our Mosquito Selects (1-1) will travel to Rotary Park on Sunday, May 25 to play their next EBA Select game against the Royal York 1 Cardinals at 6:00 p.m.