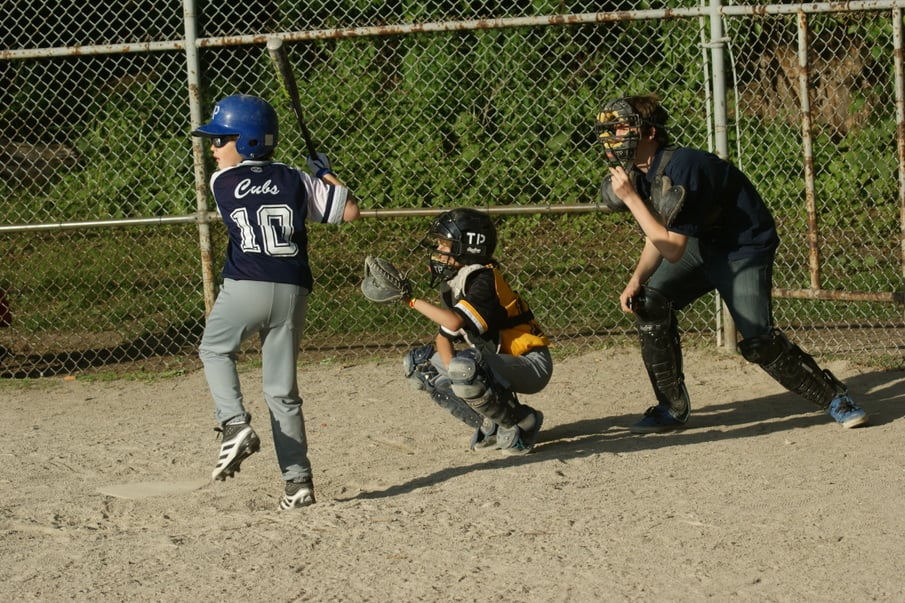 Leading 9-8 and with two runners on base, Isaiah (10) is poised to power a three run home run blast to deep centrefield in the third inning that would propel the Cubs to a 12-9 Mosquito Division victory over the Pirates at the Bickford Park South Diamond.

Under a ceiling of picturesque blue skies, the Cubs topped the Pirates 12-9 in 3 ½ entertaining innings of Mosquito Division action this evening at the Bickford Park South Diamond.

In a well played game by two talented teams, the Cubs ultimately prevailed over the Bucs because of their ability to deliver clutch hits with runners in scoring position at key junctures in the proceedings. 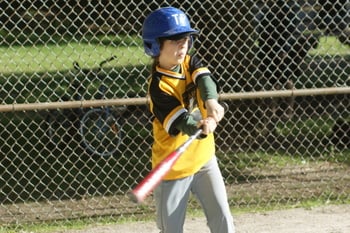 In three appearances at the dish, Pirates leadoff batter Olivia (6) would go 1 for 1 [single, two walks] while scoring a run and collecting a RBI to spark the Bucs offense.

The Pirates made the most of their opportunities in the top of the first as they jumped out to an early 4-0 lead. After Olivia (6) led off the inning with a single, Alexia (14) walked and Mark (12) singled to load the bases with no outs. Ella (8) exercised great patience at the dish to earn a RBI walk that brought Olivia home with the game’s first run.

Will (13) followed with a RBI single that allowed Alexia to come home to roost. Next, Jeremy (4) delivered a RBI hit that brought Mark homeward. With one out and bases juiced, Jasper (11) stroked a RBI single that plated Ella.

The Cubs answered back with four in the bottom of the first to even the proceedings at 4-4. After a lead off double by Elliot (1) and a walk by Julian B. (4), Javert (6) stroked a RBI single that brought Elliot home with the Cubs first run.

After a walk to Isaiah (10) loaded the bases, Nick (14) powered a two RBI triple that allowed Julian B. and Javert to come homeward bound. With one out and runner at third, Han(12) delivered a RBI single that brought Nick home with the tying run.

Cubs reliever Shamus (9) kept the potent Buccaneers off the scoresheet in the top of the second as he struck out a pair of Pirates to extricate himself from a mojo jojo bases loaded jam during the inning.

In the bottom of the second, the Cubbies exploded for four runs to take an 8-4 lead. After a leadoff single by Michael (13) and a pair of walks to Charlie (3) and Julian M. (5) loaded the bases with no outs, Cameron (7) hit into a fielder’s choice that allowed Michael to score from third. 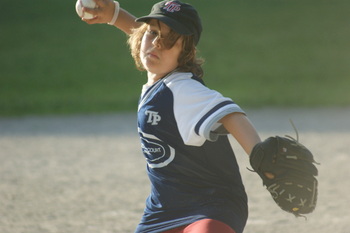 Cubs closer Miichael (13) strikes out a pair of Pirates in the fourth to seal the deal on the win.

After a one out walk to Shamus (9) loaded the bases, Alexander (2) delivered a clutch two RBI single that scored Charlie and Cameron. With runners at first and third, the Cubbies executed a double steal that allowed Shamus to motor home with the Cubbies fourth run of the frame.

However, the Pirates answered back with four shiver me timber runs in the top of the third to tie the game 8-8. With one out and the bases loaded, Oscar (1) patiently drew a RBI walk that brought Jeremy home. With two outs, Olivia, Alexia and Mark would garner respective RBI walks to plate Charlie (3) Jonah (10) and Oscar.

In the bottom of the third, the Cubs lay siege to the mizzenmast and plundered the Pirates treasure chest for four doubloons to take a 12-8 lead. After a leadoff single by Elliot and a walk to Julian B. put two Cubbies on base, Javert delivered a RBI single that brought Elliot home and put them into a 9-8 lead.

It was at this moment where Isaiah calmly stepped into the batter’s box (with no outs and two Cubs on base) and powered a grace under pressure three run home run shot to the deep dish pizza nether regions of centrefield.

The Buccaneers refused to surrender as they gamely rallied for a run in the top of the fourth to trim the deficit to three. With two outs and two Pirates on base, Jonah hit a RBI single that scored Ella.

Shaken, but not stirred, Cubs closer Michael (13) would icily mow down a pair of Pirates to extinguish their comeback bid and seal the deal on a hard earned victory.

The Pirates continued their trend of everyone plays everywhere with all players playing infield or outfield, and starting their seventh different pitcher already in just their third game. 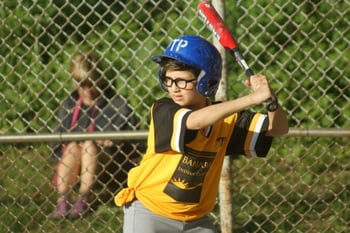 In the top of the first, Olivia (6), Mark (12), Jeremy (4) [stolen base as well], and Jasper (11) all got hits. Jasper is playing only his first game for the Pirates, and contributes the RBI hit for the fourth run.

In the bottom of the first inning Olivia made her Pirates pitching debut, throwing a lot of strikes, and just missed throwing a runner out at home.

In the second inning Mark (hit) and Olivia (walk) both got on base and stole bases. Ella (8) draws her second of three walks on the night, showing a great eye at the plate.

In the bottom half, Jonah (10) pitches for only the second time ever, and gets some Gold Glove defensive help the field on a great force out at second base by Olivia.

The third inning saw the Pirates rally back from four runs down to tie the game at 8.  Jeremy (4) [two stolen bases], Charlie (3), Jonah, Oscar (1) [RBI], Olivia [RBI], Alexia [RBI], and Mark [RBI] all drew walks with patience at the plate, taking close pitches with two strikes.

In the bottom half of the third, Oscar (1) pitched for only his second time ever and pounded the strike zone forcing the Cubs hitters to swing the bat.

In the top of the fourth, the Pirates rally falls just short, but not before Ella drew her third walk, and stole second, then scored from second on an infield hit with some aggressive base running.