TRAILING 6-0, THE BUCCANEERS RALLY IN JOLLY ROGER FASHION TO HEAVE DOWN THE ARTFUL DODGERS AND BELAY THE GOLD DOUBLOONS OF SWEET VICTORY AT CHRISTIE PITS 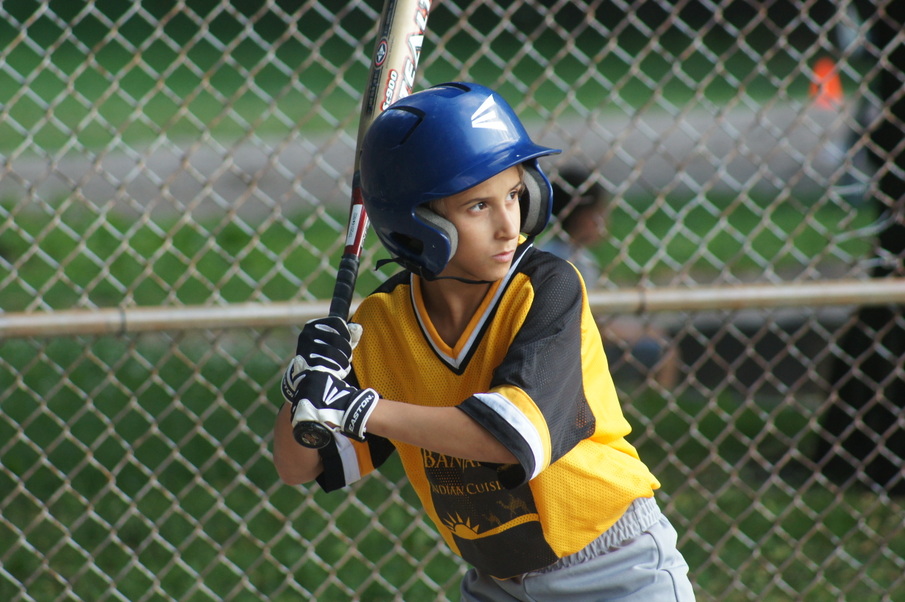 SPARKPLUG > Down 6-0, Adi’s (7) leadoff walk in the top of the fourth sparked the Pirates epic blow the man down comeback. After reaching base, Adi promptly stole second and third and came blazing home to score the first Bucs run [on a Dodgers error] in a huge ten run inning.

Under a blanket of tranquil summer skies, the Pirates defeated the Dodgers 10-7 in four thrilling innings of Mosquito Division action this evening at Christie Pits Diamond Two Bay.

Here is the Pirates Log of the pitched battle for mizzenmast by ye gnarly Captain Jeff Kolyn:

Boy o’ boy what a game. We saw pitching, defense, lots of K’s, and an epic comeback for the ages.

In the top of the first inning, the Pirates were held scoreless.  Jeremy (4), Ella (8), and Olivia (6) each drew a walk. However, the Bucs were not quite able to get that elusive hit to drive the runner home. But they took the Dodgers pitcher to a lot of full counts and really grinded out their at bats.

In the bottom of the first, Pirates starter Mark (12) pitched for the first time since Opening Day back in May. Wily Mark amassed three strikeouts and held the potent Dodgers offense to only two runs.

Trailing 2-0, the Pirates were yet again held scoreless in the top of the second. But Andre (15) worked yet another walk, showing veteran like patience at only a Rookie Ball age.

Buccaneers reliever Olivia (6) took over the pitching chores in the bottom of the second. Olivia had another K, in a strike filled inning, but it was her defensive prowess that shined. With runners on first and second, the Dodgers batter stung a screaming liner up the middle, that was speared out of mid-air for a highlight reel catch. The Gold Glove catch was worthy of the standing ovation she received from both dugouts and the full size crowd!

In the third inning, Javert (6) from the Cubs [helping the Pirates tonight], screamed a ball up the middle for a potential single, but was robbed on a nice deflection and heads up play by the Dodgers first baseman. Once again the Pirates were held scoreless.

In the bottom of the third inning, Pirates reliever Adi (7) pitched a scoreless inning, striking out three batters, and stranding a runner at third base.

It’s the top of the fourth, let the rally begin!  Down 6-0, Adi started off the Pirates comeback with a walk, and promptly stole second and third. Jeremy (4) followed up with a walk as well, and stole second base.  With Ella up, Adi was able to steal home on a ball that got away up the first base line. Ella, Olivia and Oscar (1) [RBI] each then earned a walk. Then Jasper (11) came up with the bases load and hit a screamer to the first base side, that was knocked down by the Dodgers first baseman who raced to the bag just in time to get a hustling Jasper. However, a run scored on the sacrifice out.

Now with two outs, Andre, Lucas (9) [RBI], Vincent [a Rookie ball call up and speed demon – RBI], and Han (12) [RBI] each picked up walks to tie the game. With the bases loaded and still two outs, Elliot (1) [Cubs] hit an RBI single into the hole between first and second, scoring the go ahead run. Javert stepped up next and smacked a two run double to right field putting the Pirates up by three. Adi worked a full count walk, and loaded the bases again, and Jeremy took another full count walk to score the tenth run.

In the bottom of the fourth inning, Pirates hurler Mark reenters the fray to close out the game… and he delivers. Mark strikes out the side again for his sixth K against the Dodgers and seal the deal on a hard fought victory.

After his game ending strikeout, Mark was swarmed by ecstatic teammates, high fives all around.