SEIZING THEIR OPPORTUNITIES, THE ARTFUL DODGERS PICKPOCKET THE BIG RED MACHINE TO MAKE OFF WITH A CHILLY WILLY VICTORY AT BICKFORD PARK 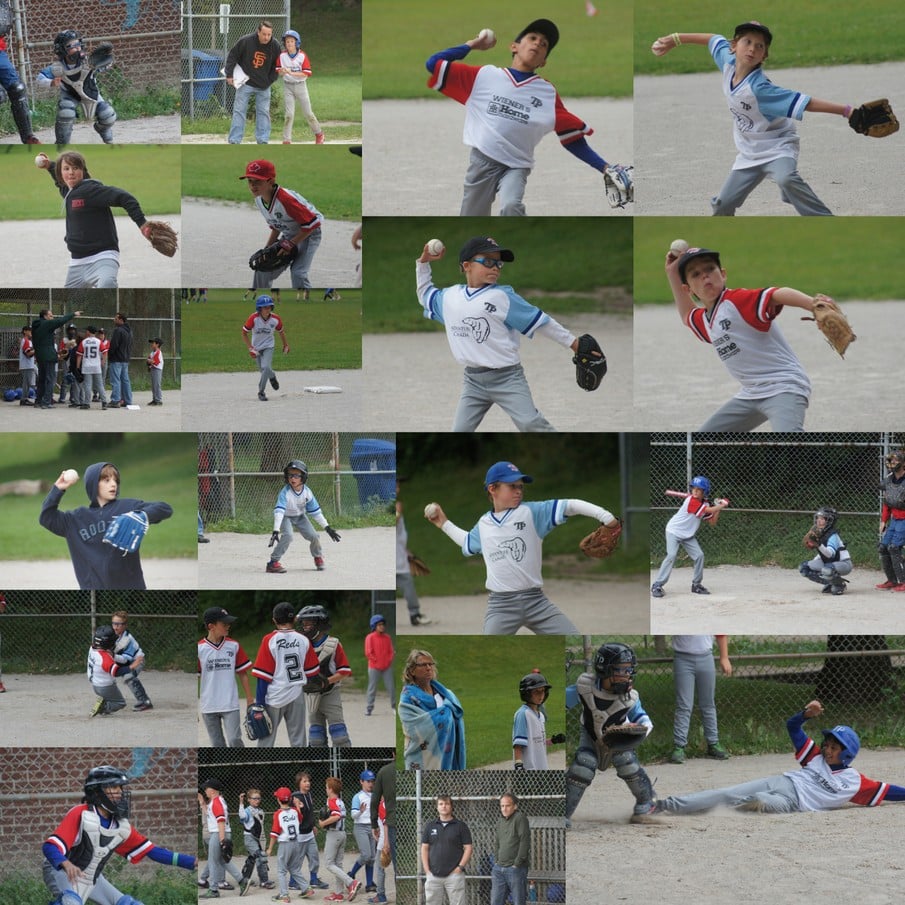 Collage pictures from the Mosquito Division game between the Dodgers and the Reds at the Bickford Park South Diamond.

Amidst gusty winds and overcast skies in the dog days of summer, the Dodgers defeated the Reds 8-5 in four innings of Mosquito Division action this evening at the Bickford Park South Diamond.

In an entertaining affair between two talented teams, the Artful Dodgers ultimately prevailed for the win over the Big Red Machine by seizing and capitalizing on opportunities that were presented to them.

The Dodgers took an early 2-0 lead in the top of the first. After Charlie (5) walked, Devin (6) singled and Harris (12) walked to lead off the inning and load the bases, Lachlan (9) exercised patience at the dish to draw a RBI walk that brought Charlie home with the first run of the game. P.J. (2) followed with a RBI sacrifice hit that allowed Devin to motor home.

With two runs in and the bases loaded, Reds starter Matthew (4) icily struck out two Dodgers to close out the frame.

The Reds made hay of five walks in the bottom of the first to take a 4-0 lead. Ibi (7), Griff (3), Gabriel (2) and Alex (12) would patiently draw walks during the inning and come home to roost via a series of errors and passed balls by the Dodgers.

In the top of the second, the Dodgers answered back with four to retake the lead 6-4. With the bases loaded, P.J. (2), Teresa (13), Mary (14) would draw respective RBI walks that allowed Devin, Harris (12) and Lachlan (9) to come homeward bound. Next, Charlie would be hit by a pitch that allowed P.J. to saunter home with the bases juiced.

In a three up and three down effort, Dodgers reliever Harris (12) would mow down three Reds in the bottom of the second to keep them off the scoresheet.

The Dodgers would tack on two in the top of the third to widen their advantage to 8-4. With the bases loaded, Mary would deliver a clutch two out RBI single to bring Harris home. Charlie would follow with a RBI walk to plate Lachlan.

The defensive highlight of the inning was a Gold Glove 9-6 putout made by the Reds. With no outs and a Dodgers baserunner at first, Reds right fielder Matthew retrieved a sharply hit ball and had the wherewithal to make a laser throw to shortstop Griff at second to erase the Dodgers runner for the first out of the frame.

The Big Red Machine scored a run in the bottom of the third to trim the deficit to three. With a pair of Reds on the basepaths, Gabriel stroked a RBI sacrifice hit to deliver Griff home.

However, Dodgers reliever Charlie (5) cooly escaped a bases loaded jam during the inning by inducing a 1-3 putout and striking out one.

Reds pitcher Matthew mowed down three Dodgers with a John Deere 25-HP V-Twin Hydrostatic Lawn Tractor in the top of fourth to keep them off the scoreboard.

In the bottom of the fourth, Dodgers closer Lachlan (9) mowed down three Reds with a Toro LX Lawn Tractor to seal the deal on the hard fought victory.