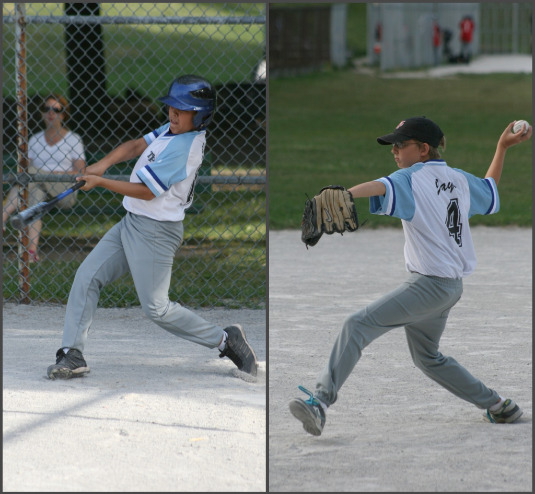 JAYS ONE-TWO PUNCH! From left to right: Tommy (13) delivers the first of his three hits (one triple) and Kieran (4) pitches a runless first inning.

The Jays put the pedal to the metal on Diamond # 3 today by routing the Yankees 11-4 in four innings of play.

Our TP Cub Reporter said that the Jays made the most of what the Yankees pitching crew offered up. The Jays cobbled together eight hits and numerous base on balls and were freewheeling on the basepaths in stealing twenty-one bases.  Kudos toTommy (13) of the Jays who collected three hits including a triple.

Combined with a group of Jays pitchers who only allowed the Yankees four runs over four innings and you have the recipe for victory. Kudos to Jays pitchers Kieran (4), Jake (12) and Tommy (13) who allowed no earned runs in their respective innings pitched.