YANKS WIN ROUND ROBIN GAME IN THE BOTTOM OF THE FIFTH

Justin (2) of the Yankees hit a clutch bases loaded single to bring in the winning run in the bottom of the fifth inning.

In a scintillating Peewee Divsion round robin game this evening on Diamond # 2, the Yankees edged the Jays 10-9 in five innings. 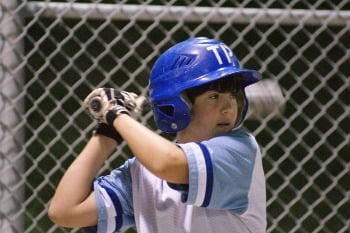 Sam (5) of the Jays clubbed a two run home run in the top of the fifth inning to tie the game.

The game was an evenly matched battle between two excellent teams as the lead changed hands several times.

After the Jays (1-1) had pulled ahead 6-5 in the top of the third, the Yankees (1-1) punched right back with four runs in the bottom of the fourth inning. Keying the rally was a bases loaded triple by Jacob (5) which brought hime three runs and put the Bronx Bombers back in front 9-6.

However,  the tenacious Jays countered in the fifth and scored three to tie the game. The key hit was a long two run home run hit by Sam (5) which tied the game.

With the score knotted at 9-9, the Yankees counterpunched in their half of the fifth as they proceeded to load the bases. It was at this juncture that Justin (2) delivered a clutch single which brought in the winning run.

Kudos to both Michael (3) and Cameron (10) of the Yankees who each pitched two strong innings.