WITH THE SEMI-FINAL WIN, THE ROYALS ADVANCE TO THE PEEWEE CHAMPIONSHIP GAME 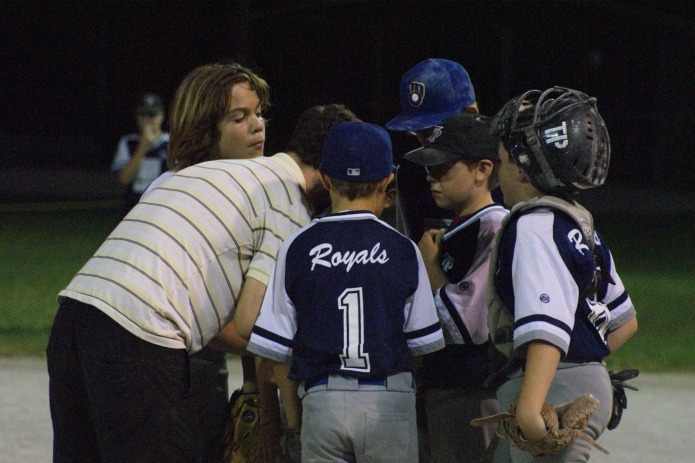 A MOUND OF CONFIDENCE > Royals Coach Rob Ball holds a pitching mound conference with his players during their 14-2 Peewee semi-final win.

In a lopsided Peewee Division semi-final game tonight at Diamond # 2, the Royals manhandled the Jays 14-2 in six innings to advance to the Peewee Championship Game.

The Royals (1) were firing on all cylinders as they executed with focused precision both offensively and defensively against the Jays (4).

The Royals pitching squad and defense dominated the Jays as they held their opponent off the scoreboard for four straight innings. In fact, the stellar Royals pitching brigade of  Jamie (2), Simon (1), Reid (15) and David (8) combined to allow only two runs and two hits over six innings.

Additionally, the Royals pitchers were backed up by some solid defensive play throughout the game. Most memorable were three consecutive 4-3 putouts by Royals second baseman Carlos (12) in the second inning which robbed the Jays of some sure hits.

Meanwhile, the Royals offense made the most of their opportunities in constructing a 13-0 lead by the fourth inning. The disciplined Royals offensive machine drew six walks and pounded out twelve hits (5 doubles) during the proceedings.

The Royals now await the winner of the other Peewee semi-final between the Orioles (2) and the Yankees (3) scheduled for tomorrow night.