DESPITE THE FINAL RESULT, TORONTO PLAYGROUNDS FINDS LESSONS TO BUILD UPON 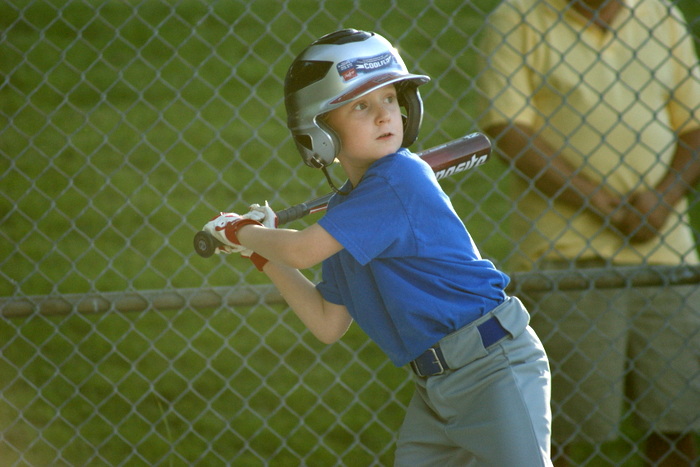 Jacob (5) of the Rookie Ball Selects had a two-hit game for Toronto Playgrounds, including a triple.

Jacob (5) did his best to will Toronto Playgrounds to a win with a two-hit game, including a triple, but the Rookie Ball Selects dropped a hard fought 19-7 six-inning contest to Bloordale at Neilson Park this evening.

After pushing across two more runs in the top of the fifth, Toronto Playgrounds faced just a 17-5 deficit. An RBI triple by Jacob (5) and a groundout by Dexter (4) gave the Rookie Selects life.

Two additional runs in the top of the sixth helped TP close the gap to 17-7. A two-run single by Nigel triggered Lizzie’s‘ comeback.

Despite another loss for Toronto Playgrounds, Rookie Ball Select Head Coach Bill Evans remained extremely positive about his team’s prospects for the remainder of the season in a postgame interview.

“The team is really improving its game all around with some timely hitting, heads up base running and some great defensive plays. The boys are making plays on almost every ground ball and we even saw Aaron (2) make an impressive put out at second base with a strong throw from centre field.”

“Our infield was strong with Tyson (12), Thomas (19) and Eli (3) vacuuming up any grounder hit to the left side of the infield. Dexter (4) had a strong game at Pitcher with a put out at 1st and Oskar (6) and Nigel (20) teamed up to end the fourth inning with a great play at second. We are seeing a strong group compete and play hard at catcher with Quinn (7), Louis (10) and Piper (15) all sharing the workload behind the dish.”

With a bye week next Tuesday from the EBA Select Loop circuit, the Rookie Ball Selects (0-4) are hosting an inter-squad game for ALL players. The coaches and players wish to invite parents and fans to come out to Christie Pits Diamond #3 on Tuesday, June 12 to watch the boys showcase their skills.