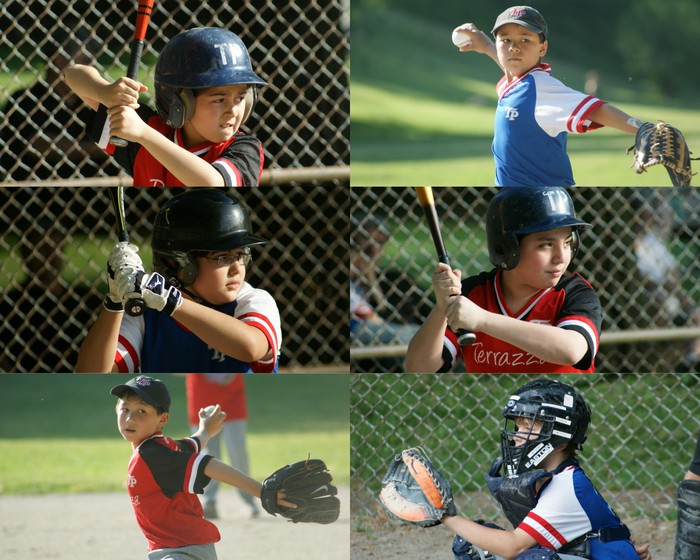 In a thrilling Mosquito Division game at the Bickford Park South Diamond this evening, the Lizzies rallied for four runs and edged the Cardinals 10-9 in 3 ½ innings.

Like two champion calibre boxers in the ring, the Cardinals and Lizzies battled tooth and nail throughout the proceedings. A testament to their fortitude was reflected on the scoresheet as the lead changed hands five times during the game.

The Cardinals jumped out to an early 2-0 lead in the top of the first inning when Jasper (7) delivered a clutch two run single that brought Christian (8) and Dean (13) home with the opening runs of the game.

In the bottom of the first, the Lizzies took advantage of  six walks and scored four runs to surge into the lead 4-2.

With one out in the top of the second, the Cardinals answered the clarion call and scored three runs to retake the lead 5-4. After Claire (10) had scored from third on a passed ball, Brian (5) delivered a scorching two run triple that brought Evan (6) and Jack (4) homeward bound.

The Lizzies stormed back in their half of the second as they made the most of their opportunities and scored two to jump back in front 6-5. Keying the Lizzies offensive charge was a run scoring single by Simon (10) which brought Kyle (15) home with the tying run; and a bases loaded walk drawn by Sam (7) that allowed Dylan (1) to trot in with the go ahead run.

However, the Red Birds stormed back with four runs in the top of the third to retake the lead 9-6. After Tillie (9) of the Cardinals had led off the top of the third with a walk, Christian (8) promptly delivered a run scoring triple which brought Tillie home to tie the game. A run scoring single by Dean (13) allowed Christian to come in to put them back in front 7-6. Taking advantage of a hit batter, a single, and two more walks, the Cardinals scored two more to close out their half of the inning.

The Lizzies offensive machine used a disciplined approach at the plate in the bottom of the third to parlay six consecutive walks into a four run comeback rally to jump back in front 10-9.

In the top of the fourth, Lizzies closer Jeremy (8) cooly struck out three consecutive Cardinals to earn the save and close out the victory.

EXTRA INNINGS: Kudos to Cardinals pitcher Brian (5) who limited a potent Lizzies batting order to two runs in the second inning while striking out three (1 IP; 2 R; 2 H; 3 W; 3 K). Brian also had two run triple along with three rbi’s in his only at bat. Additional kudos to Lizzies closer Jeremy (8) who mowed down the side with a three up and three down performance to preserve the win and Lizzies starting pitcher Kyle (15) who held the Cardinals to two runs in the first inning (1 IP; 2 R; 4 H; 0 W; 1 K). Players, coaches, parents and spectators in attendance had to battle a series of changing weather elements at Bickford Park during the game. At times,  there were periods of humidity, sunny and hazy skies and a period of passing rain at the diamond.

PIRATES 5  GIANTS 3 > In a game where pitchers from both teams combined to record a total of 24 strikeouts, the swashbuckling Pirates rallied in the top of the fifth inning to usurp the Giants 5-3 at Christie Pits Diamond 2. Trailing 2-1, the Pirates scored four to take a 5-1 lead and wrest away the gold doubloons of victory. The Giants gamely rallied for a run in the bottom half of the fifth, but the comeback fell short. Kudos to Maxwell (7) of the Giants for pitching two solid innings while allowing no runs ans striking out six; Kudos to John Lee (5) of the Giants for a great two inning pitching effort where he allowed only one run while striking out six; and another kudos to Pirates pitcher Adam, who not only started the game, but also closed it out in stellar 1-2-3 fashion. In two innings, Adam allowed only one run and struck out six. (Game Report filed by Gordon Belray)

CUBS 8  DODGERS 6 > In a rainy affair at Christie Pits Diamond 3, the darlin’ Cubs clawed out an 8-6 four inning victory over the artful Dodgers. Highlight of the game were two triples delivered by Jack of the Cubs. (Game report filed by Andrew Yonick)