WITH ALL PLAYERS MAKING A CONTRIBUTION, TORONTO PLAYGROUNDS WAS FIRING ON ALL CYLINDERS IN SECOND WIN OF THE EBA MOSQUITO SELECT LOOP SEASON 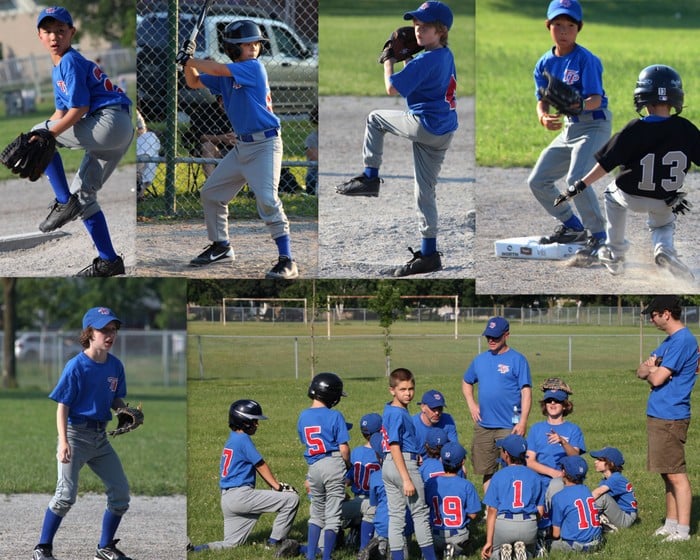 TOTAL TEAM EFFORT > Clockwise from top left: Mosquito Select starting pitcher Brian (25); Jack (27) delivered a double, triple and a home run; Maxwell (4) pitched two solid innings with 4 K's; John Lee (19) is about to apply the tag on a Martingrove base runner after receiving a laser throw from catcher Sasha (13); a pre-game meeting; Zachary (32) not only closed the game, but also made a great infield play with the bases loaded.

In tough, no nonsense style, the Toronto Playgrounds Mosquito Select team took care of business and disposed of Martingrove (1) 17-2 in four innings at Lloyd McConnie Memorial Fields this evening.

TP was full merit for their second victory of the EBA Mosquito Select Loop season as they dominated Martingrove 1 both offensively and defensively.

The Mosquito Selects jumped out the starting gate with three runs in the top of the first inning. Keying the offensive bugle call was a rbi double by Max (7) and a two run home run by Jack (27).

Mosquito Select starting pitcher Brian (25) set the tone of the proceedings in the bottom of the first as he did not allow Martingrove 1 to collect any hits or runs while striking out one. Brian was also aided by a super defensive play by his teammates as TP catcher Sasha (13) threw a laser strike to John Lee (19) at second base to catch a Martingrove baserunner attempting to steal.

Daniel (20) received the game game ball for delivering his first hit of the season along with a rbi.

Toronto Playgrounds cobbled together a series of walks and steals along with some timely hitting to score five runs in the top of the second to widen their lead to 8-0. Spraking the offensive thrust were a pair of rbi singles by Brian (25) and Maxwell (4) and a pair of rbi doubles by Ben (5) and Jack (27).

For the next two innings (bottom of the second and third), TP relief pitcher Maxwell (4) continued the bullpen’s goal to shut down the Martingrove 1 offense. Maxwell had a solid outing as he allowed only two runs while striking out four.

In the top of the third, TP scored four more to increase their lead to 12-1. Keying the offense were numerous steals along with some clutch rbi singles delivered by Lucas (10), John Lee (19) and Daniel (20).

In the top of the fourth, the Mosquito Selects went for the jugular as they scored five more to widen the margin to 17-2. TP put pressure on the Martingrove 1 defense by successfully stealing numerous times and forcing their opponent into making a series of errors that either advanced runners or allowed them to come home. Sparking the offense was a rbi triple by Jack (27).

In the bottom of the fourth, TP closer Zachary (32) sealed the deal by allowing no runs while striking out one.

After the game, the Mosquito Select Coaches awarded the game ball to Daniel (20) for collecting his first hit of the season along with a rbi.