IN A LOW SCORING GAME WHERE PITCHING DOMINATED, THE JAYS EKE OUT A WIN IN THE THIRD INNING 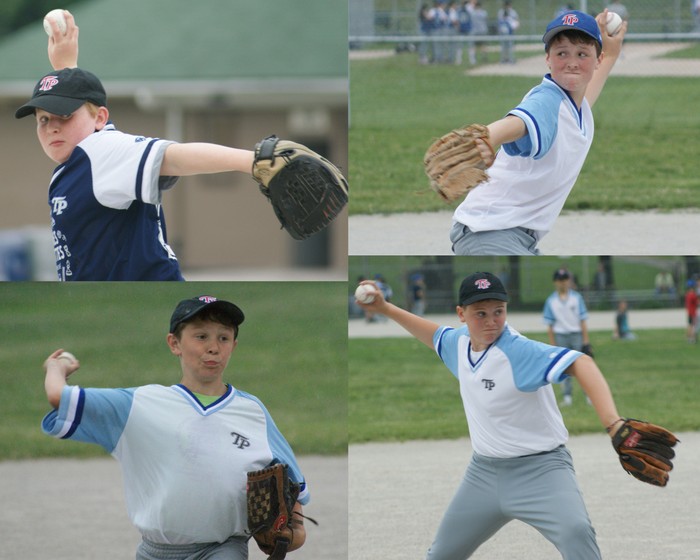 Beneath overcast skies at Christie Pits Diamond 2 this evening, the Jays eked out a 4-1 Peewee Division victory over the Royals in 3 ½ innings.

Runs were at a premium in a low scoring contest as the pitchers from both teams dominated throughout the game.

In the top of the first inning, the Royals began the game by drawing three consecutive walks to load the bases. However, Jays starting pitcher Sam (15) regained his composure and struck out the next three Royals to extricate himself and the team from a precarious situation.

The Jays scored the first run of the game in the bottom of the first as Adam’s (5) sacrifice hit to first allowed Keegan (2) to come home from third.

Trailing 1-0, the Royals answered right back with a run of their own in the top of the second when Roberto (8) stole third and came home on an errant throw by the catcher.

In the bottom of the second, the Jays offense exercised some patience at the plate and loaded the bases. However, Royals starting pitcher Evan (12) got out the one out jam by striking out next two Jays to keep the score 1-1.

After striking out the first two Royals to begin the top of the third, Jays reliever Reid (13) walked the next three batters to load the bases. However, Reid regained his focus on the mound and promptly struck out the next Royals hitter to avert any damage.

The Jays offense finally broke open the logjam in the top of the fourth. Keegan (2) led off with a double to left and he advanced to third on a Royals throwing error. Reid delivered a run scoring single that brought Keegan home and put the Jays in front 2-1. With one out, Chae Won hit a run scoring triple that brought Reid home. Leading 3-1, Sam (15) singled and that brought Chae Won home with another insurance run.

With the rain coming down a 4-1 lead in the top of the fourth, Jays closer Keegan (2) closed out the proceedings by striking out two Royals.