On a comfortable evening within the serene confines of Dominico Field at Christie Pits, the Royal York 2 Cardinals walked over the Toronto Playgrounds Bantam Select team 16-5 in four innings of play in their EBA Bantam Select Loop home opener. 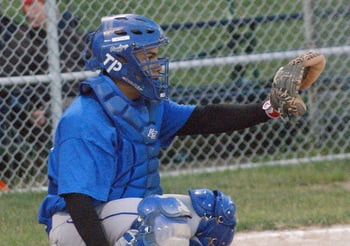 An undermanned Bantam Select team battled gamely thoughout the proceedings. Except for a meltdown in the third inning, where Royal York scored ten runs, the result might have been entirely different for TP.

Bantam Select starting pitcher Cooper (8) limited the Cardinals to two runs in the top of the first.

However, Royal York starter Stephen (3) kept TP off the scoresheet in the bottom half of the first as he cooly struck out two.

Aided by some stellar defense from his TP teammates, Liam (66) pitched a 1-2-3 top of the second. Two Royal York baserunners, who had gotten on base with walks, were caught stealing by the laser arm of Bantam Select catcher David (18) at third and second.

In the bottom of the second, TP scored a run to to trim the deficit to one. Tenzin (24) came home from third on a wild pitch.

Leading 2-1, the Cardinals made the most of their opportunities in the top of the third as they scored ten runs. A collective of three Bantam Select pitchers combined to issue ten walks, a single and a double.

Trailing 12-1, the Bantam Selects rallied for two runs in the bottom of the third. Salim (5) delivered a sacrifice that brought Liam (66) home. Mikel (2) scored on a wild pitch.

Royal York went for the jugular in the top of the fourth as they punched across four insurance runs to widen the margin to 16-3.

Toronto Playgrounds added two runs in the bottom of the fourth to close out the scoring.

The Bantam Selects (0-3) play their next game on Thursday, June 14 as they travel to The Queensway to play Royal York 3 at 8 p.m.