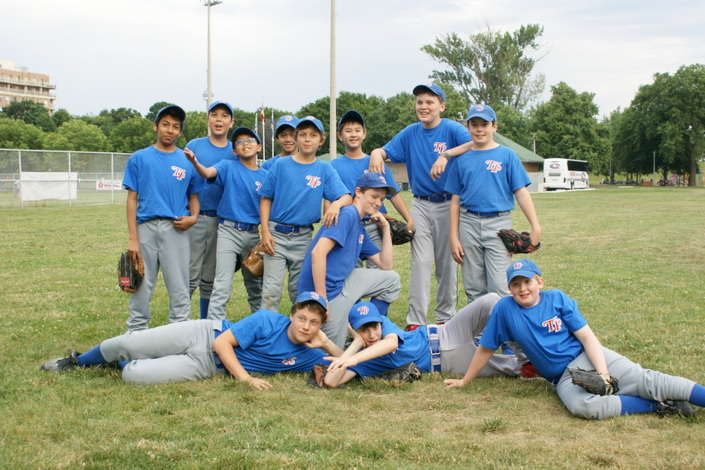 As they have been doing all through the 2012 season, the Toronto Playgrounds Peewee Select team continues to excite, impress, mature and battle as a cohesive unit, game in and game out. And the wonderful part of it all is that the players, coaches and parents continue to have a fun time on an exhilarating rollercoaster ride of a magical season.

Missisauga North prevailed over our Peewee Selects 11-8 this evening in an exciting five inning quarter-final game at the Vaughan Tournament. The loss knocked TP out of the tourney.

But, once again, the Peewee Selects played magnificiently in the tournament’s round robin phase in order to qualify for the playoff stage.

On Friday evening, TP defeated the Mississauga Majors 14-5 in convincing fashion to win their first round robin game at the Vaughan Tournament.

After a rain delay on Saturday morning, the Peewee Selects took care of business in throttling East York 13-7 to attain their second victory of the round robin. TP starting pitcher Jamie (2) pitched two strong innings in allowing only two earned runs, while striking out two. TP reliever Keegan (44) solidly pitched the rest of the way in closing out the win.

In the Saturday afternoon game, Vaughan defeated the Peewee Selects 10-0. However, with two round robin wins under their belt, TP (2-1) had already quallified for the playoff round of the tournament.

The TP Baseball Committee wishes to extend its congratulations to the Peewee Selects for its success at the Vaughan Tournament. Once again, the Peewee Select team represented Toronto Playgrounds in a honourable and professional manner. We commend Peewee Select Head Coach Rob Ball, and his assistant coaches (David Lam and Dave Hammond) for their expert stewardship in guiding this talented group of players to such levels of success in 2012.

The Peewee Selects (8-1) return to the EBA Select circuit on Wednesday, July 11 when they play host to York at Christie Pits Diamond 2 at 8 p.m.