FOUR ACES > The Lizzies victory over the Orioles was anchored by a strong effort from the bullpen. Clockwise from top left: David (8) of the Lizzies tossed a one run second inning with a strikeout; John (3) mowed down the O’s in 1-2-3 fashion with three K’s in the first inning; Marcus (9) threw a scoreless third with two strikeouts; Harry (6) closed out the victory by allowing only two runs while striking out two Orioles.

On a pleasant summer evening at Christie Pits Diamond 2 tonight, the Lizzies topped the Orioles 8-3 in 3 ½ innings of Peewee Division play.

The Lizzies used a combination of solid pitching and opportune offense to stymie the Orioles through the course of the proceedings.

In the top of the first, Lizzies starting pitcher John (3) tossed a stellar 1-2-3 inning by striking out all three Orioles that he faced. 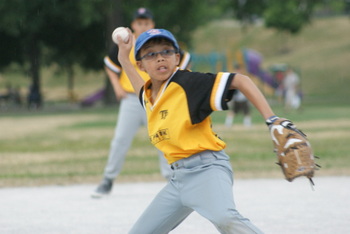 Orioles reliever Jamie (13) threw a scoreless 1-2-3 third inning against the Lizzies while striking out two.

The Lizzies made the most of their offensive opportunities in the bottom of the first by scoring four runs to jump into a 4-0 lead. With John and Harry (6) on base, Marcus (9) delivered a clutch two run double to bring both Lizzies baserunners home. Subsequent bases loaded walks to Baxter (5) and Josh (15) allowed Hewitt (2) and Dylan (14) to come homeward bound.

The Orioles answered back with a run in the top of the second trim the deficit to three. Jamie (13) led off the inning with a walk and subsequently stole two bases. Jamie eventually scored from third on a wild pitch. However, Lizzies reliever David (8) pitched a strong inning and did not allow the O’s offense to do any further damage.

In the bottom of the second, the Lizzies added four insurance runs to the scoresheet to widen their lead to 8-1. With one out and Jayden (7) on base, John delivered a clutch run scoring double that brought him home. Harry followed with a rbi single that allowed John to come home. After the Lizzies had loaded the bases, Harry came zooming home with a run on an Orioles throwing error. Finally, Dylan (14) stroked a rbi single to bring in Marcus to close out the scoring.

Lizzies reliever Marcus (9) threw a solid top of the third with two strikeouts to keep the Orioles off the scoreboard.

Jamie (13) of the Orioles threw a scoreless bottom of the third with two strikeouts to keep the potent Lizzies offensive machine at bay.

The Orioles offense came to life in the top of the fourth as they scored two to trim the margin to 8-3. A pair of bases loaded walks accounted for the O’s runs. However, Lizzies closer Harry eventually quelled the O’s comeback attempt by striking out the last batter to record the final out.