MOTORVATIN’ TO THE EBA PLAYOFFS, TORONTO PLAYGROUNDS PULLS AWAY FOR TWELFTH WIN IN FINAL REGULAR SEASON GAME AT CHRISTIE PITS

GROOVIN’ > Davey (15) went 3 for 3 (two singles, triple) at the plate in leading Toronto Playgrounds to a 16-10 win over Annette in 4 ½ innings at Christie Pits. Davey had three RBI’s, two runs scored and three steals. Davey also pitched a scoreless fourth with 3 K’s. 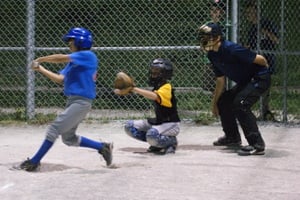 Keegan (44) strokes a 2 RBI double in the third inning.

Amidst the humid confines of Christie Pits Diamond 2 this evening, the Toronto Playgrounds Peewee Select team cruised to a 16-10 victory over Annette in 4 ½ innings.

Playing in their final regular season game before the EBA Peewee Select Playoffs this coming weekend, TP took care of business as they won their twelfth game of the season.

In the top of the first, TP starter John (33) set the tone early as he pitched a solid inning. John faced only three batters as he kept Annette off the scoresheet with two strikeouts.

The Peewee Selects blasted out of the gates in the bottom of the first as they parlayed five hits into five runs to surge into an early lead. With one out, Davey (15) and Keegan (44) singled to put two runners on base. Sam (34) followed with a RBI double to bring Davey home. Reid (30) hit a RBI single to bring in Keegan. 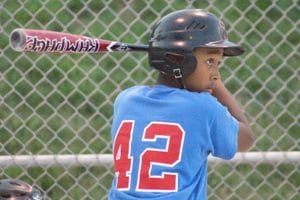 Marcus (44) is poised to deliver a 2 RBI single in the first inning.

With two outs and two baserunners on, Marcus (42) stroked a clutch 2 RBI single into right field that brought in Sam and Reid. Marcus proceeded to steal second, and advanced to third on a wild pitch. Eamonn (31) drew a walk. At this point, TP executed a double steal that allowed Marcus to blaze home with the final run of the inning.

TP reliever Keegan (44) kept Annette off the scoreboard in the top of the second as he tossed a strong inning with a strikeout.

After issuing a leadoff walk in the bottom of the second, Annette reliever Stephen (56) found his rhythm and struck out next three Peewee Select batters on consecutive strikeouts to keep the potent TP offensive machine at bay.

Annette doggedly fought back to score four runs in the top of the third to trail 5-4. The A’s took advantage of three walks, two hits, a hit batsman, and a TP error to get themselves back into the game. 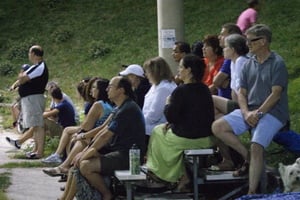 It was standing room only in the third base bleachers at Christie Pits Diamond 2 as an enthusiastic crowd cheered on the Peewee Selects in their final regular season game.

However, the Peewee Selects answered right back in the bottom of the third with six runs to surge ahead 11-4. After Simon (5) walked and David (13) singled to lead off the inning, Davey delivered a RBI single to bring in Simon. Keegan followed with clutch 2 RBI double that sent David and Davey homeward bound.

With one out, Reid hit a RBI triple to bring in Keegan. Harry (9) followed with a RBI single to allow Reid to come home. After Harry had stolen two bases to reach third, Marcus delivered a sacrifice hit that brought Harry in with the final run of the inning.

Rebounding from a rough outing the previous week, TP reliever Davey (15) exerted his authority over the proceedings in the top of the fourth with a powerful pitching performance. Davey was all business as he kept Annette off the scoreboard with three strikeouts.

Toronto Playgrounds took advantage of four walks and a pair of hits in the bottom of the fourth to add five insurance runs to the ledger and widen their lead to 16-4. One of key hits came off the bat of David. With the bases loaded, David stroked a 2 RBI single. Davey immediately followed with a 2 RBI triple.

Annette gamely took advantage of five walks, a hit batsman, a pair of singles, and a TP error to score six runs in the top of the fifth to trim the deficit to six. However, the Peewee Selects lead was never seriously threatened as TP closer David (13) eventually found his biorhythm and closed the curtain on the game.

With the conclusion of the regular season, the Peewee Selects (12-2) will now head off to the EBA Peewee Select Playoffs (August 10-12). TP will play their first playoff game against Rexdale on Friday evening at Smythe Park at 8:15 p.m.

EXTRA INNINGS: Kudos to Davey (15) for a superb 3 for 3 effort (2 singles and a triple) at the plate. Davey delivered three RBI’s, two runs scored, and three stolen bases. Additionally, Davey also pitched a scoreless fourth inning where he struck out three Annette batters; Kudos to Keegan (44) for going 2 for 3 at the dish (single, double) with 3 RBI’s, two runs scored, and a stolen base. Keegan also pitched a scoreless second inning with a strikeout; Kudos to Marcus (42) for delivering 3 RBI’s on a single and a sacrifice hit. Marcus also scored a run and stole a pair of bases. Plus, Marcus was solid behind the plate as TP’s catcher in the first two innings; Kudos to John (33) for pitching a scoreless inning in the first with two strikeouts. John also drew two walks in two plate appearances, while scoring one run and stealing four bases; Kudos to Reid (30) for a 2 for 2 night at the dish (single, triple). Reid delivered a RBI, alone with scoring two runs; Kudos to David (13) for a 2 for 3 effort at the plate. David scored two runs and had 2 RBI’s.