IN A THRILLER, THE CARDS RALLIED FOR FOUR IN THE FINAL INNING AND HUNG ON TO NIP THE MIGHTY GIANTS 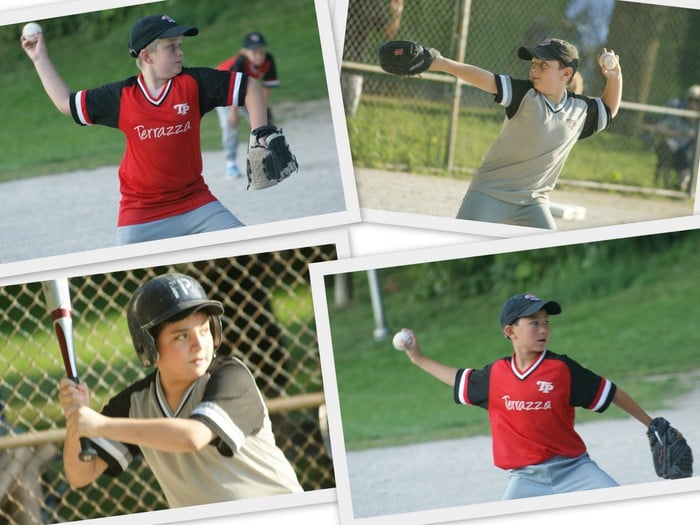 Clockwise from top left: Cardinals closer Evan (12) seals the deal and the win with a two strikeout effort in the fourth; Giants reliever John (12) struck out the Cardinals in 1-2-3 fashion in the second; Cardinals reliver Brian (5) kept the Giants off the scoreboard in the third with a three strikeout effort that gave his team an opportunity to stage a comeback rally; With the bases loaded, Christian (12) powered a dramatic 3 RBI double in the first inning that cleared the bases and propelled the Giants into an early lead.

Under warm and humid skies at the Bickford Park South Diamond this evening, the Cardinals edged the Giants 10-9 in a thrilling four inning Mosquito Division showdown. 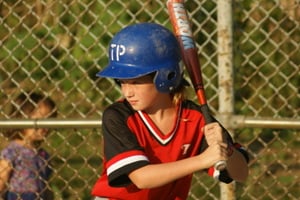 Trailing 8-6, the Cardinals rallied dramatically for four runs in the top of the fourth and final inning to take the lead.

With no outs and the bases loaded, Evan (12) delivered a grace under pressure 2 RBI single that brought Brian and Victor homeward bound and allowed the Cards to take the lead 10-8.

In the bottom of the fourth, the mighty Giants refused to surrender and doggedly battled back with two singles and a hit batsman to load the bases. With no outs, Oliver (2) delivered a sacrifice hit that allowed John to come home from third, and trim the deficit to one. 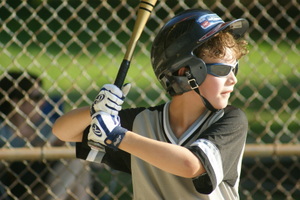 Protecting a slender 10-9 lead and with the tying and winning runs on base, Cardinals closer Evan (12) regained his composure and cooly struck out the next two Giants batters to seal the deal and earn the win.

The Cards jumped out to an early 2-0 lead in the top of the first. Evan led off the inning with a double. Dean (13) and Jasper (7) followed with a pair of walks to load the bases. With one out, ‘Tenacious’ Tilley followed with a clutch RBI single that brought Evan home with the Red Birds first run. Brian followed suit with a RBI single that allowed Dean to come home.

However, the Giants answered back with four runs in the bottom of the first to take the lead 4-2. Cormac (6) led off the inning with a single and advanced to third on an error and stolen base. Cormac zoomed home with the Giants first run on a Cardinals error. 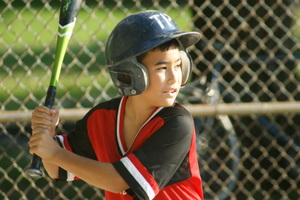 Ben (3) stroked a clutch RBI single in the third that brought in the Cardinals tying run.

With two outs, the Giants patiently loaded the bases on a fielder’s choice and two walks. At this point, Christian (4) stroked a clutch 3 RBI double that cleared the bases.

In the top of the second, Giants reliever John (12) masterfully held the Cardinals off the scoreboard. In 1-2-3 fashion, John mowed down the Red Birds with three strikeouts.

The Giants exercised patience at the plate and utilized six walks in the bottom of the second to score four runs to increase their lead to 8-2.

But the Cardinals answered back with four runs in the top of the third to trim the deficit to two. After Tilley led off the inning with a walk, Brian stroked a RBI single to bring her home. Brian stole two bases to reach third, and came motorin’ home on a Giants error. Victor followed with a single and advanced to third on a series of wild pitches. Evan stroked a RBI single to bring Victor home. Evan advanced to third on a pair of wild pitches, and scored a run on another Giants miscue.

Cardinals reliever Brian (5) pitched in stellar fashion in the bottom of the third to keep the potent Giants off the scoresheet with a three strikeout effort. His performance kept his team within striking distance of a comeback rally.

At this juncture in the proceedings, the Cardinals stared into green pastures of Bickford Park and contemplated their destiny with overcoming an 8-6 Giants lead in the top of the fourth.