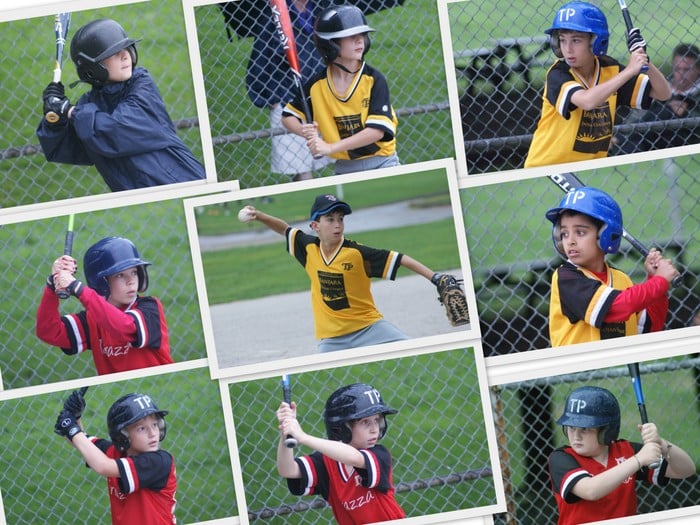 Clockwise from top left: Daniel (3) delivered a clutch 2 RBI single in the fourth to put the Pirates in front; Quinn (12) stroked a 2 RBI single in the fourth that delivered the Pirates eventual winning run; Adam (15) hit two doubles for the Bucs; Jian (4) went 2 for 2 for the Pirates with a RBI; Claire (10) drew three walks in three plate appearances for the Cardinals with 2 RBI’s; Zachary (15) hit a double in the fourth and scored two runs for the Cards; Adam (14) had a RBI single for the Red Birds and a run scored; Evan (6) of the Cardinals drew 3 walks, had a RBI, and scored two runs; Pirates reliever Adam (15) pitched a scoreless third and struck out two Cardinals.

Beneath overcast and drizzily skies this evening, the Pirates edged the Cardinals 7-6 in a four inning nailbiter at Christie Pits Diamond 3 to win their opening game in the Mosquito Division Round Robin.

Trailing 4-3 after three innings, the Pirates surged to life in the top of fourth and rallied for four runs to take the lead. With no outs and two runners on base, Daniel (3) stroked a clutch 2 RBI single to bring Aaron (5) and Jian (4) home with the tying and lead runs.

After a walk to Nigel (6), the “Mighty” Quinn (12) delivered a grace under pressure 2 RBI single to bring in Daniel and Nigel with two insurance runs.

As it turned out, the Buccaneers would need all the runs that they could accumulate in their treasure chest to fend off the pesky Cardinals.

Trailing 7-4, the Cards refused to surrender and doggedly stage a rally in the bottom of the fourth. After Zachary (15) led off the inning with a double, Adam (14) hit a RBI single to bring Zach home and trim the deficit to two.

With one out, Evan (6) and Jack (4) drew walks to load the bases. However, Pirates closer Jian (4) induced Evan (12) to hit into a fielder’s choice, where Jian threw home to catcher Lucas (14) to force out Adam at the plate.

Claire (10) followed with a bases loaded walk that brought Evan (6) home and shave the margin to one.

With two outs and protecting a slender 7-6 lead, Jian cooly induced Xavier (8) to hit into a fielder’s choice, where he threw home to his catcher (Lucas) to force out Jack and end the game.

MOSQUITO DIVISION STANDINGS (after 1 of 15 Round Robin Games played)