IN A BARNBURNER, THE WHITE SOX PREVAIL IN THE FOURTH INNING TO WIN THEIR FIRST ROUND ROBIN GAME 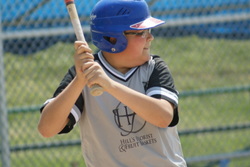 Marco (5) scored two key runs for the White Sox with some excellent base running.

Beneath warm summer skies this evening, the White Sox edged the A’s 12-11 in a thrilling four inning barnburner at Dominico Field at Christie Pits to win their first game of the Bantam Division Round Robin.

The three time defending Bantam Division champions scored a run in the top of the fourth to break an 11-11 deadlock.

White Sox closer David Medrano (14) came into game in the bottom of the fourth and cooly pitched a three up and three down inning to seal the deal and earn the save.

BANTAM DIVISION STANDINGS (after 2 of 6 Round Robin Games played)