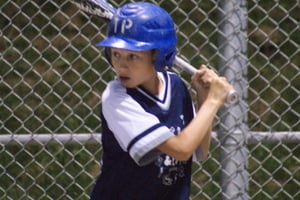 Hugh (13) drew a bases loaded walk in the fourth inning that brought in the Royals eventual winning run.

Under the lights this evening at Christie Pits Diamond 2, the Royals defeated the Lizzies 10-7 in five innings to win their first game of the Peewee Division Round Robin.

The Royals took advantage of the opportunities that were given to them as they parlayed eleven walks and five key hits into a 10-3 lead after four innings of play. In the end, it was a lead that they would not relinquish.

The Lizzies rallied for four runs in the bottom of the fourth to trim the deficit to three.

In the top of the fifth, Lizzies reliever John (3) held the potent Royals offense off the scoresheet with a sizzling 1-2-3 three strikeout performance that kept his team within striking distance of a rally

However, Royals closer Davey (5) dashed the Lizzies comeback dreams in the bottom of the fifth with a powerful 1-2-3 three strikeout effort to seal the deal.

PEEWEE DIVISION STANDINGS (after 1 of 8 Round Robin Games played)