IN A THRILLER, THE GO GO LIZZIES PREVAIL IN A TITANIC BATTLE AGAINST THE MIGHTY GIANTS 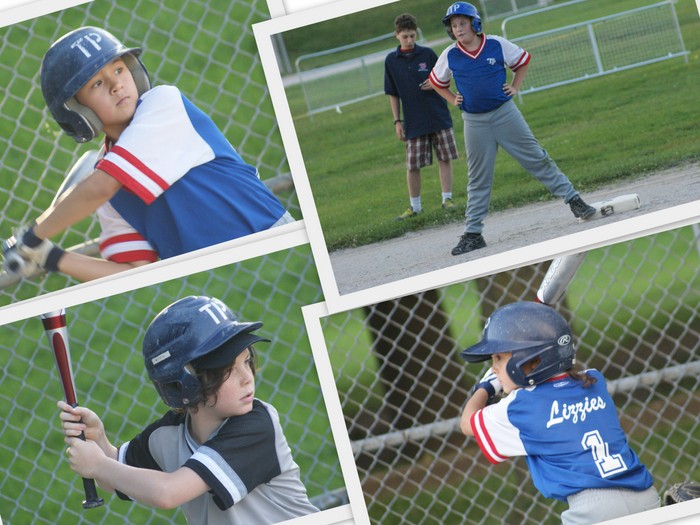 Clockwise from top left: Kyle’s (15) clutch RBI double in the fourth inning powered the Lizzies to a dramatic victory. Kyle went 3 for 3 (2 singles, double) for the game with a RBI; Cameron (3) standing at second base in the fourth before he hustled home with the winning run; Dylan (1) went 2 for 2 at the plate with 2 RBI’s; Finley (9) powered the Giants offense with a 2 for 2 effort (single, double) at the dish, with 3 RBI’s. 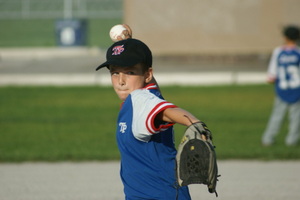 Beneath beautiful summer skies, the Lizzies prevailed over the Giants 9-8 in an edge of your seat four inning thriller at Christie Pits Diamond 3 to win their second game of the Mosquito Division Round Robin.

With one out and two Lizzies runners on base, Kyle (15) stroked a grace under pressure clutch hit to the outfield that allowed a motorin’ Cameron (3) to hustle in from second base and slide into home in a cloud of dust with the dramatic winning run.

It was a bang bang play at the plate as Cameron came sliding in at the same time as Giants catcher Cormac (6) was set to receive the “on the money” throw from his outfielder. In the collision at the dish, Cormac was unable to squeeze the throw in his mitt as the ball squirted loose and Cameron reached over for good measure and touched the plate with his right hand to make sure that he was safe at home. 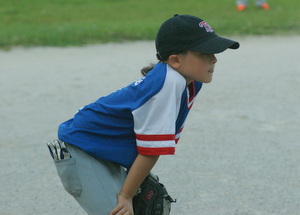 Lizzies third baseman Dylan (1) was the catalyst in a super 5-3 putout in the third inning.

Simply put, it was a game that had it all.

Lizzies starting pitcher Sam (7) threw a workmanlike top of the first as he kept the potent Giants offense off the scoresheet with a three strikeout effort.

In the bottom of the first, the Lizzies scored two to jump out in front 2-0. Jeremy (8) and Dylan (1) stroked respective RBI singles to power the Lizzies attack.

The Giants answered back in the top of the second with three runs to take a 3-2 lead. Keying the Giants offense was a RBI single from Finley (9).

However, the Lizzies took advantage of five walks and a clutch RBI single by Jeremy to score three runs in the bottom of the second to retake the lead 5-3. 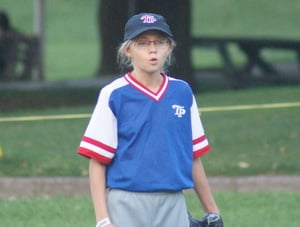 Lizzies rightfielder Sarah (12) catches her breath after initiating a spectacular 9-1-2 putout in the fourth inning.

Lizzies reliever Jeremy (8) stymied the Giants in the top of the third as he kept them off the scoreboard with a powerful two strikeout effort. Jeremy was also helped out by a super defensive play from his teammates. Lizzies third baseman Dylan cooly corralled a hot shot off the bat of John (12) of the Giants and threw a laser strike across the diamond to first baseman Zack (12) to record the second out of the inning in a bang bang play at first.

In the bottom of the third, the Lizzies added three more runs to stretch their lead to 8-3. Keying the Lizzies offense were respective RBI singles from Dylan and Justen (13).

Down by five runs and with their backs against the wall, the Giants refused to wave the white flag of surrender in the top half of the fourth, and in tenacious fashion rose to occasion, and rallied for five runs to tie the game 8-8. The Mighty Giants doggedly took advantage of six walks and two hits to even the match. Keying the Giants comeback was a clutch 2 RBI double by Finley.

The inning was also highlighted by super 9-1-2 defensive putout by the Lizzies. As Finley’s hit landed on the green grass in right field, Lizzies rightfielder Sarah (12) calmly corralled the ball and made a strong throw to Lizzies closer Jeremy near the pitching mound. Jeremy turned and threw a laser strike to catcher Kyle (15), who cooly applied the tag on Giants baserunner Mabon (13) in a bang bang play at the dish to record the second out of the inning.

In the bottom of the fourth, Lizzies leadoff batter Sam (7) was robbed of a sure hit when Giants first baseman Jonathan (1) made an excellent shoestring catch in the webbing of his glove.

With one out, Cameron singled and was followed on base by Jeremy, who drew a walk.

It was at this moment in the game, where Kyle and Cameron looked out into the horizon and came face to face with destiny.