IN A WELL PLAYED FIVE INNING THRILLER BY BOTH TEAMS, A DRAW WAS A FITTING RESULT IN AN VERY ENTERTAINING PEEWEE DIVISION SEASON OPENER AT CHRISTIE PITS 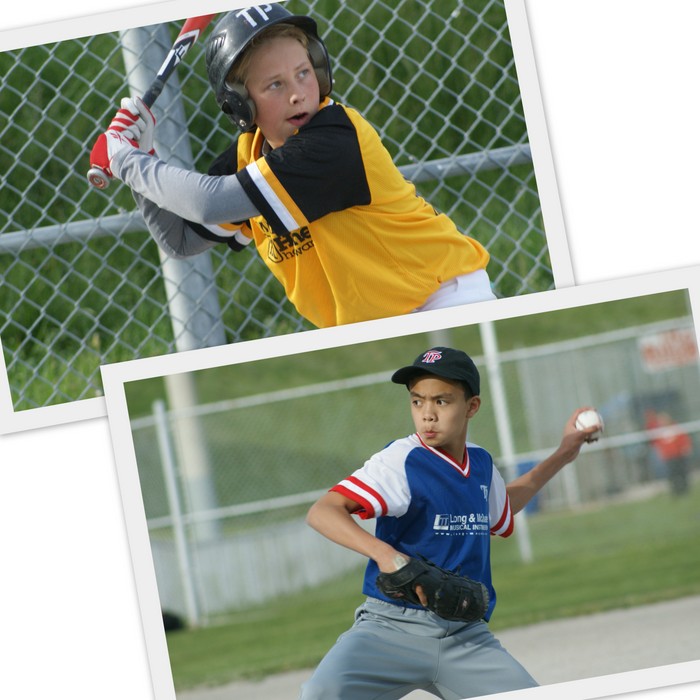 Top to bottom: With two outs and the bases loaded, Magnus (9) drew a clutch RBI walk in the bottom of the fifth to bring Astrid (11) home from third with the tying run; Lizzies southpaw pitcher John (2) tossed two scoreless innings against the O’s with four strikeouts.

Underneath warm and tranquil blue skies at Christie Pits Diamond 2 this evening, the Lizzies and Orioles played to a 4-4 tie in five innings of riveting Peewee Division action.

Right from the first pitch to the final out, it was a quality low scoring game that was well played by both teams. Great pitching (19 strikeouts recorded by both squads). Solid defense. Runs coming at a high premium.

Trailing 4-3, with two outs and the bases loaded in the bottom of the fifth, Magnus (9) exercised great plate discipline to draw a clutch RBI walk that brought Astrid (11) home from third with the tying run.

With the bases still loaded and the game on the line, Lizzies closer Maxwell (13) dug deep into his reserve tank and struck out the next Orioles batter to preserve the draw.

In the top of the first, Orioles starting pitcher Brian (12) threw a scoreless inning against the Lizzies with two strikeouts.

Lizzies southpaw starter John Eric (2) pitched out of bases loaded jam in the bottom of the first by striking out two Orioles.

The Lizzies scored one in the top of the second to jump out to a 1-0 lead. After John Eric (2) had hit a lead off double, he immediately stole third base. Noel (14) delivered a RBI sacrifice hit to bring John Eric home. Orioles reliever Simon (14) mowed down two Lizzies to close the inning.

The Orioles answered back with a run in the bottom of the first to even the match at 1-1. After Joseph (5) drew a two out walk, he was followed onto the basepaths on consecutive singles by Simon (14) and David (7). Astrid (11) patiently worked the count in her favour and drew a clutch bases loaded RBI walk to bring Joseph home with the tying run. Lizzies reliever quelled the uprising by striking out the final Oriole batter to notch three strikeouts for the inning.

In the top of the third, the Lizzies offense broke out of the gates with three to retake the lead 4-1. Katya (3) and Izzy (9) led off the inning with a single and a walk. Both came around to score after a wild pitch and error by the O’s. With two runners on base and one out, Jack hit a RBI double to bring home Marcus (8).

The O’s responded with two in the bottom half of the third to trim the deficit to 4-3. Ben (15) and Ben (6) led off the inning with a walk and a single and both came around to score on a Lizzies error and a dropped third strike.

Orioles reliever Magnus (9) struck out two in the top of the fourth to keep the Lizzies off the scoreboard.

Lizzies reliever John Eric mowed down two Orioles in the bottom of the fourth to preserve his team’s one run lead.

With Orioles reliever Ben (6) on the mound in the top of the fifth, the O’s defense executed a proficient double play to keep the Lizzies off the scoring ledger.

In the bottom of the fifth, Astrid led off the inning with a walk. With two outs, Ben (6) singled and Fabrizio (8) walked to load the bases.

It was at this juncture in the proceedings where Magnus stood in the batter’s box and looked out into the green grass on the horizon and came face to face with destiny.