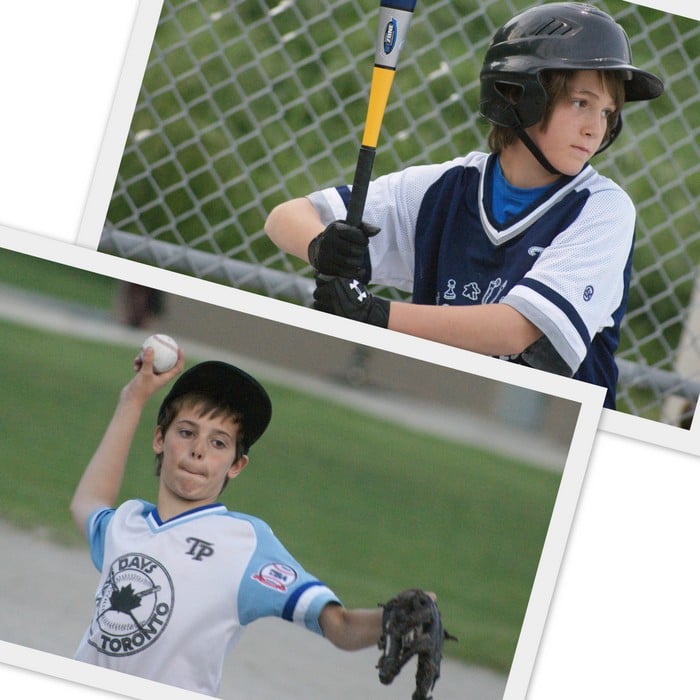 Top to bottom: Thomas (11) of the Royals went 2 for 2 at the plate with a run scored and 2 RBI’s; Jays pitcher Cam (8) threw two strong innings where he yielded only three runs while striking out four.

Under the lights on a pristine spring evening at Christie Pits Diamond 2, the Royals defeated the Jays 9-6 in four innings of Peewee Division action.

The Royals built an early lead and quelled a late rally attempt by the Jays to reign supreme in the victory column on Opening Day.

In the top of the first, the Royals made the most of their opportunities as they jumped out to a 4-0 lead. After Adam (9) had led off the inning with a single and immediately stole two bases to reach third. Thomas (11) followed with a RBI single that brought Adam home with the game’s first run. After Mary (13) drew a walk to put two Royals on base,  Zack (15) delivered a RBI sacrifice hit to allow Thomas to come home. Arlo (8) followed with a one out RBI double that brought in Mary. After a steal of third, Arlo zoomed home with the inning’s final run on throwing error by the Jays catcher.

The Jays replied with one run in the bottom of the first to trim the deficit to three. With two outs, Cam (8) drew a walk and stole two bases. Cam came home on a Royals miscue. Royals southpaw starter Lucas (6) pitched a solid inning as he struck out two Jays.

The Royals added another run to the ledger in the top of the second to stretch their lead to 5-1. After a leadoff walk, Lucas (6) stole second and eventually came home on a Jays error. Jays reliever Cam (8) pitched a workmanlike inning in mowing down two Royals batters.

Royals reliever Adam (9) and his defense kept the Jays off the scoresheet in the bottom of the second.

In the top of the third, the Royals pushed across two runs to widen their advantage to 7-1. A one out RBI sacrifice hit by Connor (2) allowed Charley (5), who had led off the inning with a single, to score. With two outs, Adam reached base on a dropped third strike by the Jays. A clutch RBI single by Thomas brought Adam home.

The Royals added two insurance runs in the top of the fourth to increase their lead to 9-2. Exercising discipline at the plate, the Royals offensive machine led off the inning by drawing three consecutive walks to load the bases. A subsequent RBI walk by Jacob (3) allowed Zack to come home. With two outs, Xavier (4) delivered a clutch RBI single to score Arlo.

Refusing to wave the white flag of surrender, the Jays offense surged to life in the bottom of the fourth as they gamely rallied for four runs to trail 9-6. Cam, Angus (1) and Max (11) drew three consecutive walks to lead off the inning. After a series of wild pitches and an error by the Royals, all three came homeward bound to score. With two outs, Yuki (4) drew a walk and proceeded to steal two bases. On a wild pitch, Yuki came sliding home.

Shaken, but not stirred, Royals closer Xavier (4) eventually found his rhythm as he dug deep into his reserve tank to strike out the final Jays batter to seal the deal.