TRAILING 10-7, THE RED BIRDS TAKE FLIGHT IN THE FINAL INNING AND SCORE SEVEN RUNS TO USURP THE ARTFUL DODGERS AT CHRISTIE PITS DIAMOND 2 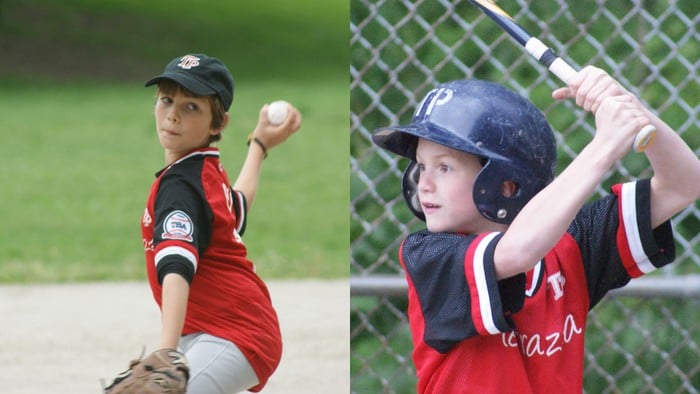 Left to right: Cardinals closer Solomon (11) struck out three Dodgers in the fourth inning to seal the deal and the win; Alex (6) hit a Grand Slam, Triple and collected 7 RBI’s to power the Cards offense.

Under a thick sheath of humidity that permeated the field at Christie Pits Diamond 2 this evening, the Cardinals rallied in dramatic fashion to defeat the Dodgers 14-10 in a riveting 4 inning Mosquito Division showdown.

Down 10-7, the Cards stormed back for seven runs in the top of the fourth to seize the gold doubloons of sweet victory.

In the bottom of the fourth, Cardinals closer Solomon (11) sealed the deal by striking out three Dodgers.

Kudos to Alex (6) of the Cardinals for his brilliant offensive performance at the plate. Alex hit a Grand Slam home run and a triple to collect 7 RBI’s to power the Red Birds over the Artful Dodgers.