MAKING THE MOST OF THEIR OPPORTUNITIES, THE ARTFUL DODGERS PREVAIL OVER THE GO GO LIZZIES AT BICKFORD PARK 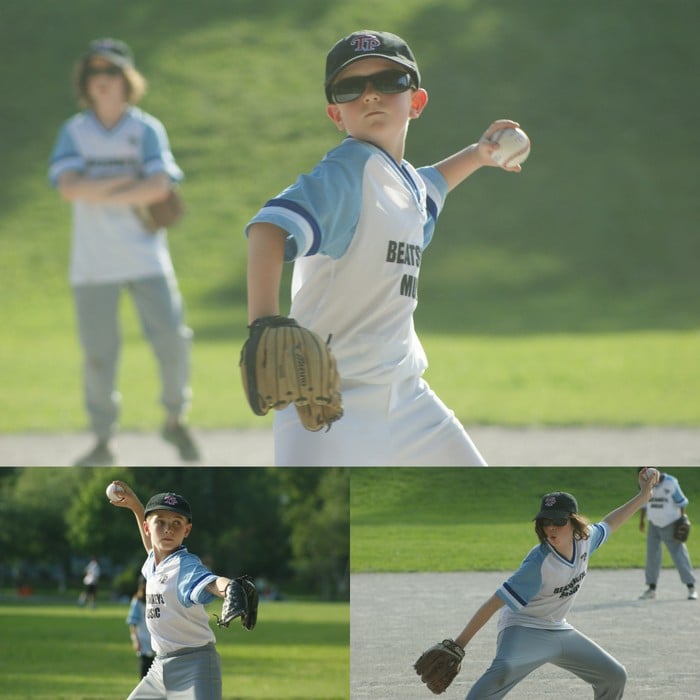 Playing beneath very warm and humid skies on the final day of Spring this evening at Bickford Park, the Dodgers defeated the Lizzies 9-4 in an entertaining 3 ½ inning Mosquito Division showdown. 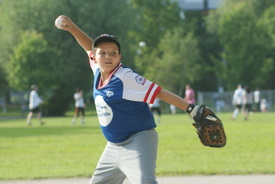 The artful Dodgers used a combination of strong pitching, good defense, and plate discipline to prevail over the Go Go Lizzies.

In the top of the first, Dodgers southpaw starter Jacob (7) pitched a scoreless inning as he struck out two Lizzies.

The Dodgers offense made the most of their opportunities in the bottom half of the first as they took advantage of six walks to jump out to a 4-0 lead. Jacob led off the inning with a walk and proceeded to steal a pair of bases. On his steal of third, the throw from the Lizzies catcher sailed high and down the third base line allowing Jacob to motor home with the game’s first run.

After a double by Gen (10), both Gus (15) and Finley (9) drew a pair of walks to load the bases. Taking advantage of a Lizzies error, Gen ran home with another run. With one out, Max (3) drew a walk to reload the bases. At this juncture, Ella (8) and Alexia (11) exercised great patience at the plate and both drew RBI walks to allow Gus and Finley to come homeward bound. 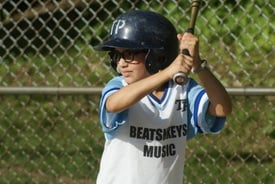 The Lizzies scored a run in the top of the second to trim the deficit to three. Leading off the inning, Xavier (8) reached base after he was hit by a pitch. With two outs, Curtis (12) stroked a RBI single to score Xavier. However, Dodgers starter Jacob masterfully quelled the Lizzies uprising with two strikeouts.

In the bottom of the second, the Dodgers replied with one to widen their lead to 5-1. After a lead off walk to Simon (14), Gen delivered him home with a one out fielder’s choice. However, Lizzies southpaw reliever Curtis (12) was able to subdue the Dodgers offensive machine with a strong two strikeout effort.

The Lizzies scored again in the top of the third to trail 5-2. Devin (6) led off the inning with a walk and eventually came around to score after a series of stolen bases and a Dodgers error. Dodgers lefty reliever Finley (9) subdued the Go Go Lizzies comeback attempt with a two strikeout performance. 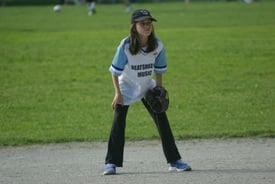 Dodgers second baseman Alexia (11) made a Gold Gove play in the third to record an unassisted putout to end the inning.

The defensive highlight of the inning was Dodgers second baseman Alexia’s Gold Glove play with two outs and the bases loaded.  Alexia deftly corralled a hard hit shot by the Lizzies in her black glove (with pink trim) between first and second and had the baseball wherewithal to calmly race over to second base and record the unassisted third out of the inning.

Taking no prisoners, the Dodgers utilized seven walks and added four insurance runs in the bottom of the third to stretch their advantage to 9-2. Finley, Kaden (13) and Max (3) opened the inning with three consecutive walks to load the bases. With another patient approach at the dish, Ella worked the count in her favour and drew a RBI walk to bring Finley home. A wild pitch by the Lizzies allowed Kaden to barrel home with another run.

Refusing to wave the white flag of surrender, the Lizzies gamely rallied for two runs in the top of the fourth to trim the margin to 9-4. After Mark (11) [walk], Fatima (14) [hit by a pitch], and Max [walk] loaded the bases to lead off the inning, Luke (5) delivered Mark home with a one out RBI single. With two outs and the bases still juiced, Devin battled hard at the dish and drew a clutch RBI walk to bring Fatima home.

Shaken, but not stirred, Dodgers closer Oliver (12) found his rhythm and struck out three Lizzies to seal the deal and the victory.

And a special kudos to Dodgers catcher Kaden (13) for catching four strong innings behind the plate against the Lizzies!