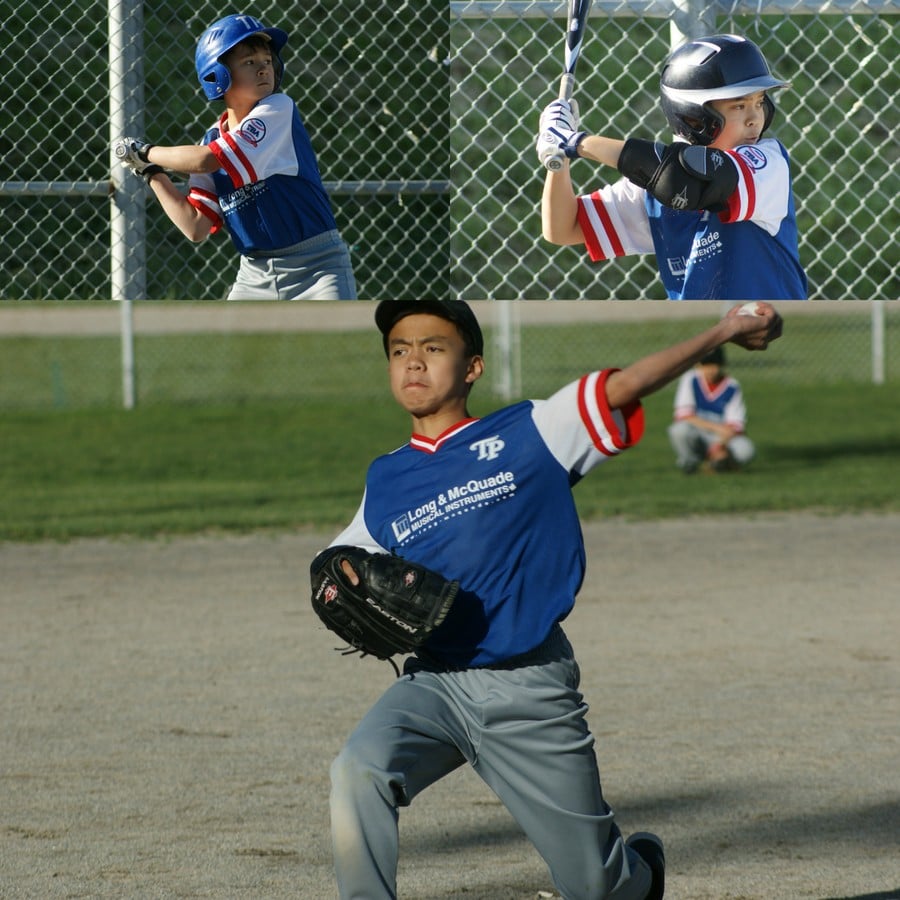 Clockwise from top left: Kyle (10) and Jack (7) delivered back to back doubles to power the Lizzies offense in the first inning; Lizzies starter John Eric (2) pitched a scoreless first inning against the Jays while striking out one.

On a hot and humid night under the lights at Christie Pits Diamond 2, the Jays made the most of some excellent pitching and patience at the plate to defeat the visiting Lizzies 8-2 in 3 ½ innings of Peewee Division action.
The Lizzies looked solid in the first inning with back to back doubles by Kyle (10) and Jack (7) off of Jay’s starting pitcher Max (11). John Eric’s (2) RBI fielder’s choice to first cashed in the Lizzies second run and put them into an early 2-0 lead.
Lizzies southpaw starter John Eric (2) quickly erased a lead off single by Jeremy (15) of the Jays, who was caught in a run down trying to steal second with a nice tag by second baseman Maxwell (13). John Eric retired the next two Jays batters with a strikeout and 1-3 putout to end the inning and continues to impress with both his blazing arm and solid bat.
The Lizzies threatened in the top of the second with back to back walks. However, the Jays extricated themselves from the jam with two strikeouts to keep the Lizzies off the scoresheet.
The Jays made the most of their opportunities in the bottom of the second as they took advantage of five walks and a single to score four runs and take the lead 4-2. During the inning, Cormac (4) of the Lizzies made a nice unassisted putout at the plate on a slow grounder with the bases loaded.
The Jays bullpen took over in the top of the third as they kept the Lizzies off the scoreboard with two strikeouts and nice unassisted defensive play at first off a hard shot down the line by Katya (3).
In the bottom of the third, the Jays took advantage of five walks to add four insurance runs on a single and a double to stretch their lead to 8-2.
The Jays closed out the game in the top of the fourth as they shut down the Lizzies’ top of the order 1-2-3 to end the game with a fine display of team pitching.